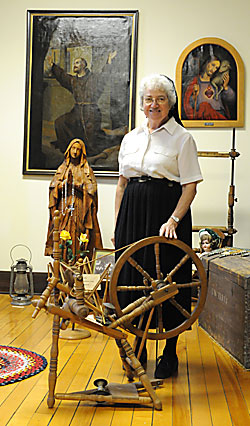 Sr. Caritas Strodthoff, archivist for the Franciscan Sisters of Christian Charity, stands near an old spinning wheel in the Heritage Room at the motherhouse in Manitowoc. (Benjamin Wideman | For The Compass)

“And there’s so much yet to be discovered, which is even more amazing. I feel like a kid in a toy store. One of my big thrills is, at 9 o’clock at night when I’m supposed to be going to bed, I think, ‘Oh, I’ll just go over for a couple minutes and open just one more box.’ And then one box turns into two, and then three. There’s just so much to discover and never enough time.”

Sr. Caritas, who primarily works as a nurse practitioner, took on the additional duties of FSCC archivist in July when her predecessor, Sr. Donna Marie Kessler, the archivist since the late 1970s, began having health problems. Sr. Caritas spends about one and one-half days per week archiving, and expects that to increase to three days per week in the near future.

“Basically, archives — to an organization or a community such as ours — are a preservation of our history for the future, and you want to make it accessible to other people,” she said. “Archives are meant to be for others — for researchers, for people to come in and look through your artifacts and records — anything to know where you’ve come from, where you’re at and your future.”

Sr. Caritas is well versed in genealogy, having thoroughly researched her family history over previous decades. But archiving is entirely different, she said.

To bring her up to speed, Sr. Caritas and 35 other archivists attended a two-week workshop earlier this year at the National Archives in Washington, D.C. Some of the attendees traveled from as far as Hong Kong and Singapore.

“At the National Archives, I learned an awful lot about how archiving has changed over the past 30 years,” said Sr. Caritas, proudly noting she touched Civil War documents during the workshop.

“I learned that once something is brought to an archive you have to appraise it and decide if it belongs here or not,” she said. “If it belongs then your next process would be how to catalog it and preserve it and then file it. And you have to make sure you have a finding aid so anybody else coming into your archives to do research can find it, too.”

She said her first priority remains compiling a computer database on everyone who ever entered the FSCC community.

All of Sr. Donna Marie’s records were typewritten. And her health problems are such that she’s unable to communicate with Sr. Caritas if questions arise about where things are and what specific organizational structures were utilized.

“Sr. Donna Marie spent so much time on all the history we have, she is to be commended for everything she did,” Sr. Caritas said. “I don’t think we can ever commend her enough for what she has given to this community.

“It’s my job now to pick up where she left off, because archiving everything that comes in, that’s always ongoing. So every week I’m always getting more information I need to catalog and box up for the future. And then some of what I need to do is go back and see how she has organized it, too.

“The most challenging thing for me now is when I look at all those boxes in the archive room and think, ‘What’s in all of them? What do I keep? What do I dispose of?'”

In her eight months as archivist, Sr. Caritas said she has come across many fascinating documents and materials. Perhaps the most intriguing of all, she said, is a crown of thorns displayed in the Heritage Room.

“I always look at it,” she said. “It’s a crown of thorns woven from trees on the property. When you made your final vows to the community, they all used to wear one of these on top of their heads. They used this decades ago, and there are very few of them still around.”

Sr. Caritas said one of the best parts of being an archivist is helping others.

“There isn’t a week that goes by that I don’t get a call or an email from somebody asking, ‘I found out one of my relatives was a sister. Do you have any information on her? We’re looking for photos or some history of her.’ I get those kinds of requests all the time,” she said. “When I can go to a file and look up her name and pull out those papers and send them to the relatives, it’s thrilling to be able to do that for people.”