“We just basically told everybody that we’ve come so far as a team, talked about how close we are as friends, how we want it more than the other team and that we just have to do it,” said Davison. 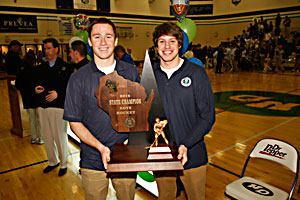 “I never imagined it happening,” said Filon, a senior forward. “I knew our team was great, but to finally finish it off was surreal.”

Notre Dame conquered a hurdle in advancing to the championship game. The two previous seasons, the Tritons fell in the state semifinals. A 6-3 victory over Verona propelled the squad to the title contest. Unity was the key to success, said Davison, a senior defenseman.

“We were a family and everybody was in it for the right reasons,” he said. “We all wanted the same goal at the end.”

“What definitely helped us is that our team had a lot of depth this year, so it wasn’t one or two lines doing all the scoring,” said Filon. “We did it together. The leadership on our team understood the challenge that semifinal game posed. We got over it.”

Notre Dame never led in the championship game until the final goal. Each time Wausau West took the lead, junior forward Riley Christensen responded for the Tritons to even the score. Junior goalie Chris Nell kept the Warriors in check with 36 saves in the finale.

“(Nell) had been hot all playoffs,” said Davison. “A lot of times we left him out to dry and he stepped up big for us. If it wasn’t for Chris playing so well, who knows what would have happened.”

The Tritons finished the season 27-3. The team’s only in-state defeats, both in overtime, were to Marquette University High School (Milwaukee) and Wausau West.

“Coach (Cory) McCracken wanted to get us good games, good experience so if we were fortunate enough to make it to state, we would be prepared,” said Davison. “As much as we would have liked to have had a perfect season, those losses definitely helped us more than hurt us. You can learn from what you did wrong.”

“We scratched our heads after those losses,” said Filon. “It was difficult having this type of year and realizing that you can be beat. The team could have broken apart, but instead, the losses brought us together.”

Filon and Davison were joined in the senior class by forwards Peter Coleman and Mark Vandenberg, who both scored goals in the semifinal game against Verona. A fifth senior, Austin Vieth, was among the team’s leading scorers as a junior, but was sidelined by injury this season. Vieth provided inspiration, including leading the team in the praying of Psalm 23 before each game.

Filon also credited Notre Dame hockey alumni for their support. Some former players practiced with the team during their winter break. Former Triton captain Alex Stein served as a model for his leadership, he added.

“It’s quite an honor to lead these kids and it’s been a lot of fun,” said Filon. “I definitely didn’t do it alone. Tim and Steven were with me, and I just look at it as a team effort.”

When Davison joined the Notre Dame program as a freshman, he didn’t plan on playing with the Tritons as a senior. He had hoped to be in a position to play junior hockey as a senior so he could play college hockey as a true freshman. Davison was drafted by the Youngstown Phantoms in the 2010 United States Hockey League (USHL) futures draft. He bypassed Youngstown to stay at Notre Dame.

“For me personally, I’m so grateful that I had the opportunity to play for Coach McCracken and the other coaches,” he said. “There are such good guys on this team. They are my teammates, but they are also my friends who I like to hang out with. I’m very thankful. I’m so happy that we had the chance to go out on top.”

Davison, who was paired on defense this season with his brother, Luke, a sophomore, will play six to eight games for the Chicago Steel of the USHL yet this season. The Steel obtained his rights in a trade with Youngstown. He then plans to play for Chicago next season before beginning his collegiate career at the University of Wisconsin.

Filon said he looks forward to watching his teammate on the ice for the Badgers and joked about Davison setting him up with tickets. Wisconsin is Filon’s top college choice. A top 10 student at Notre Dame, he plans on majoring in the biological sciences with hopes of going to med school.

“I’m all done,” said Filon in reference to playing hockey. “I have no regrets. It was a great way to go out. You wouldn’t want it any other way.”

Both senior leaders see the Tritons being among the state’s best teams again next season.

“I hope they don’t get complacent and are always trying to get better,” said Davison. “Don’t take anything for granted.”

“They will be strong as long as Coach McCracken is there,” said Filon. “He will keep them working hard.”