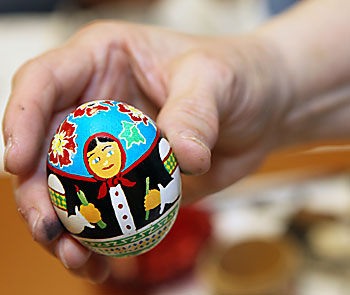 At a workshop held at Most Blessed Sacrament Church, St. Peter site, participants learned how to create pysanky Ukrainian eggs in traditional and more modern methods. Above is one of artist Ellen Roemer’s favorite Ukrainian eggs. (Jeannette Merten | for The Compass)

And she’s been teaching others since 1986. On March 19, she shared that skill with the scrapbooking/craft club at Most Blessed Sacrament Parish. Later in April, she will offer a hands-on experience at the parish.

Traditional Ukrainian eggs developed before Christianity arrived in the north of Europe. So the animal, star and sun designs originally had basic farming and creation symbolism. Today, they have Christian symbols as well, said Roemer, who belongs to Trinity Episcopal Church in Oshkosh.

The colors also have meaning, such as green for new life and spring, while black lines encircling an egg mean eternity.

Roemer said that, while modern eggs are dyed with mineral dyes “that give brighter and more reliable colors,” natural dyes first came from items like beets and red onion skins. She said the red and black combinations remain the most popular on eggs in Ukraine.

“It’s always been a way (for me) to share the fact that we have a beautiful world and recognize the things that are in it,” said Roemer about decorating the eggs.

“According to the Bible,” she added, “we are in charge of creation, but that also means we’re responsible for it. That’s one of the things, when you start to take the time to create something beautiful, then you realize how precious (creation) is.” 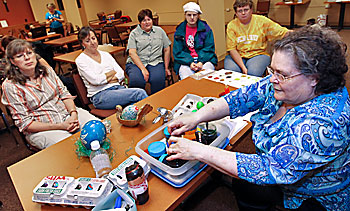 And yes, she said, the eggs retain their yolks and whites while they are being decorated, because they take the colors better. Only after the eggs are varnished do their insides get blown out as a last step.