Promoting respect for life is her calling 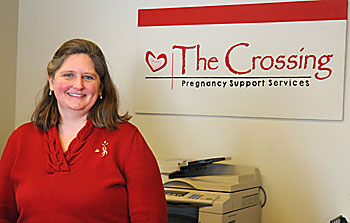 The 48-year-old Cato woman is the treasurer and co-founder of The Crossing (pregnancy support services) in Manitowoc, and is a co-facilitator of the respect life group at her parish, Immaculate Conception (also known locally as St. Mary), in Clarks Mills. She also serves on The Crossing’s Finance Committee and Healthy Relationship Team.

It’s something she has been doing nearly all her life, having been raised in a pro-life family.

“My family celebrates life; it’s just how we live,” she said. “We value that life is precious. It’s God’s will who lives and who dies. It’s not up to us.”

“They died much too young,” she said.

In addition, one of her grandmothers lost several children in the pregnancy process before finally giving birth to her first child.

And her other grandmother found out she had breast cancer, only to discover shortly thereafter that she was pregnant. She ended up having her child and then immediately underwent a hysterectomy and mastectomy.

“My grandmothers were very grateful for their children, and that impacted me tremendously,” she said.

Riesterer said she was casually involved in pro-life up until 2004, noting “my awareness of some of the issues and the national aspects of them wasn’t very high.”

After receiving a degree in theology from Silver Lake College in Manitowoc in December 2003, she decided that “it was time to use my time to find my way, where I fit in the community.”

In addition to working as a substitute teacher and performing volunteer work, she started attending Wisconsin Right to Life-Manitowoc County chapter meetings and Manitowoc County Abstinence Coalition meetings. At about the same time, fellow parishioners at Immaculate Conception asked her to help oversee respect life issues.

“Everything I was doing felt really good, very natural for me,” she said. “I enjoyed getting more active. Things in my life were really picking up speed. … It was clear to me that this is where I was being called.”

In January 2005, Riesterer and four other women decided to create a pregnancy center to serve Manitowoc County. Over the next year, several people from different Christian churches formed the first board.

The Crossing, which opened in 2006, now has about 40 volunteers and receives about 200 visits per month. The location offers counseling, serves anyone connected with pregnancy (parents, potential parents, etc.) and provides material goods (such as maternity clothes, infant diapers, bottles, formulas and children’s clothing) that people can “buy” using Mommy Money or Daddy Dollars earned through parenting programs.

She said The Crossing (www.crossingpregnancy support.org) is hoping to open a medical clinic this summer in Manitowoc for limited obstetric ultrasounds.

In 2005, Riesterer helped get a respect life group up and running at Immaculate Conception and St. Michael (Whitelaw) parishes. The group now puts information weekly in parish bulletins to help inform and educate fellow parishioners.

Riesterer continues to spread the pro-life word with her husband, Bruce, and their five children.

“I’m always asking God his will and how I can serve him,” she said. “I do it for the glory of God, not the glory of me. Whatever I’m doing is always part of the whole, part of a group effort.”