Kugel, 20, has created “God is Good: The Life and Lessons of Fr. Lorenzo,” a short documentary, which will be part of the Green Bay Film Festival, March 23-25 at the Radisson Hotel and Convention Center. The film chronicles Fr. Lorenzo Echeverria’s visit to St. Dennis in the fall of 2011. 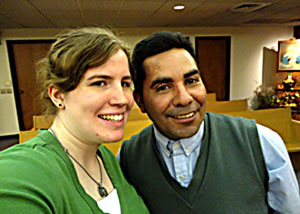 Megan Kugel, a native of Shawano who now lives in Madison, is pictured with Fr. Lorenzo Echeverria, a priest from El Salvador and the subject of Kugel’s first film project titled ‘God is Good: The Life and Lessons of Fr. Lorenzo.” (Submitted Photo | For The Compass)

Following high school, Kugel relocated to the state capital to study film and video production at Madison Media Institute. She wanted to stay involved in the church, so she sought a nearby parish, which led her to St. Dennis.

Deacon Dave Hendrickson of the parish introduced Kugel to Fr. Echeverria. The priest from Belize was invited to Madison to develop his English and experience American culture. Fr. Echeverria grew up speaking Spanish in El Salvador. English is the official language in Belize, a former British colony. Kugel explained that, prior to his Madison visit, Fr. Echeverria was able to celebrate the parts of the Mass in English, but could not deliver a homily due to the language barrier.

Kugel’s film not only follows the priest’s American experience, but shares the story of his past. Fr. Echeverria was a child soldier in the Salvadoran Civil War (1980-1992).

“It started with me interviewing Deacon Dave for a film project and turned into me following Fr. Lorenzo for a month,” said Kugel, a graduate of Sacred Heart School in Shawano. “Fr. Lorenzo is so inspiring. He is a humble man who has had an impact on my life.”

Kugel hopes viewers not only see God working in Fr. Echeverria’s life, but reflect on their own lives as well.

“My hope is that they take something away from the film,” she said, “that they can see that God has a plan for everyone.”

Kugel, the daughter of Charles and Mary Lou Kugel of Shawano, grew up a film fan. She credits her father for her passion for movies. Some of her favorites include “A Beautiful Mind,” the modern version of “Joan of Arc” and most musicals. She is currently applying for video production jobs. If another film project comes her way, she hopes it’s a positive story like her first work.

“I would like to do similar films that are affirming and inspiring,” she said. “‘God is Good’  was a very fulfilling project because it not only allowed me to capture a man’s journey, but also open a cinematic window into the Catholic faith.”

Kugel praised the St. Dennis Parish community for its generosity during filming. She worked on a tight schedule to meet the film festival’s December deadline. “God is Good: The Life and Lessons of Fr. Lorenzo” will be shown at 1:15 p.m. Sunday, March 25, as part of the film festival’s “Wisconsin Films” offerings. Kugel will be present for the showing of the 25-minute documentary.

“I’m really looking forward to seeing the other Wisconsin films,” she said. “Growing up in Shawano, it’s nice to come back to the area.”

A DVD of the film was sent to Fr. Echeverria. He gave it a positive review.

“He was amazed with how it turned out,” said Kugel. “He was very thankful. We’ve kept in contact. I am humbled and honored to be able to share his story.”