“I’ve been doing it Fridays and sometimes during the weekend,” said Harbor. “It all depends what’s going on. I’m also giving up soda, which has been a really big deal for me.” 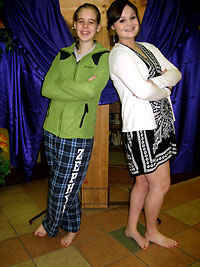 Erin Griffin, left, and Lexee Harbor, seniors at St. Mary Central High School in Neenah/Menasha, chose to go shoeless for Lent. “I really wanted to walk the steps of Christ and become closer to him,” said Harbor. (Amanda Lauer | For The Compass)

The pair were inspired after attending a session of a youth Bible study called Teen Disciples conducted by the Spiritus retreat team at the Mount Tabor Center in Menasha. “One of the leaders there was talking about at her college she saw a lot of people give up shoes for Lent. That was something that struck me as more of a sacrifice than anything I’d ever seen anyone give up and it was something that I really wanted to try,” explained Griffin.

“It was two nights before Ash Wednesday, so I didn’t have much time to decide but I thought about it and I prayed and I decided it was something that would really help deepen my faith,” she added, “because with every step I take it’s another reminder: there’s something different about this. This is not what I do during my everyday life. It’s a constant reminder of Lent and Jesus’ sacrifice.”

Harbor said Griffin approached her the day before Ash Wednesday.

“‘Hey do you want to try this?’ And I said, ‘Sure,’” said Harbor. “We went from there. I’m doing it a little differently from Erin. The days I do it I’m offering it up for somebody different and spending the day praying for them.”

People were skeptical that the girls would honor their commitment through the whole Lenten season but the girls are standing fast. “Now that people have seen that yes, I did walk through the snow and I walk all the time outside without shoes, they are a lot more convinced. A lot of people think it’s a really cool thing after I explain the reasons why,” said Griffin.

“A lot of people are like, ‘I don’t like wearing shoes either during school,’ but we’re doing it for a specific reason,” added Harbor. They are required to wear socks in the school building but Harbor mentioned she’d been stepped on a few times and neither of the girls like walking through the cafeteria in their stocking feet. They said their feet are “pretty gross” by the end of the day.

This experience has been a means for the girls to evangelize in a subtle way. “One of the biggest witness opportunities I’ve had is there are a couple of families I baby-sit for and the minute I walk in the door they’re like ‘Erin, where are your shoes?’ Then I’ll sit them down and I’ll explain to them and you can just see it in their faces, like wow, I never thought of that before. I like exposing them to a different idea,” said Griffin.

The challenge has made Lent more meaningful for them.

“I’ve never really given up something big for Lent and I feel like this year I really wanted to walk the steps of Christ and become closer to him,” said Harbor. “I feel like this is really helping. This has been a really good Lent.”

Both of the girls are heading to college in the fall so they probably won’t repeat this project next year. “I think I would consider doing it again but it gets pretty painful,” said Griffin. “The most painful part for me is my joints at the end of the day, like my hips.”

She will attend the University of St. Thomas in St. Paul, Minn., and study biochemistry. Harbor is going to UW-Fox Valley. “I’m looking into musical theater and youth ministry, like studying theology, and I’m also discerning religious life. I really want to do Spiritus, they’re a big part of my conversion,” she said.