Henson, 28, who joined the St. Norbert faculty in the fall of 2010, now uses the piano when writing music. The Dallas native is one of the top sacred music composers in the country. His works are published by GIA Publications, Inc. (Gregorian Institute of America). Henson’s most popular composition, “My Flight for Heaven,” is a choral work about seeking comfort in the embrace of death and eternal life. 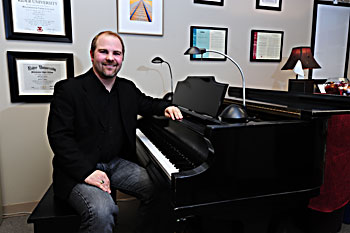 Dr. Blake Henson sits at the piano inside his office at St. Norbert College. Henson is a sacred music composer who began writing music at age 13. When the new Roman Missal was being planned, he was among church musicians authorized to write new music for the Mass. (Sam Lucero | The Compass)

“I’m probably supposed to say that ‘My Flight for Heaven’ is my favorite piece because it’s all over YouTube,” he said. “I like that one very much. If not for that piece I may not be here today. A lot of people do it. There have been some outstanding performances. My favorite is a piece I wrote for a group in Washington, D.C., last year. … It’s called ‘August Moonrise.’ It’s about 14 minutes long and is for piano, larger choir and cello solo. I think it speaks to who I am as a musician. Each thing I’ve written speaks to me in a different way.”

Henson published his first church anthem for Shawnee Press at age 16. His music pursuits began in the fourth grade when he adhered to a household rule. His parents required him and his sister, June, to take lessons or join the choir. Whichever ensemble group posted its sign-up form first was the one for him, so he joined the choir.

“The choir teacher heard me sing and called up my mother,” he explained. “She told my mother, ‘Maybe he is a little more advanced. Maybe you should get him into a music program.’ My mother looked up music in the phone book. The Texas Boys Choir had a campus in Dallas. The next thing you know, I’m in the boys’ choir, which had its own private school. I’ve been a musician ever since.”

Henson began composing at age 13. He took composition lessons throughout high school and had published 12 to 14 church anthems by the time he graduated.

“I had been a church musician my entire life, but that didn’t fall into my writing,” he said. “My music theory teacher was based at a seminary. When I did my work for him, I actually went to a seminary in the afternoons to do composition study. Since we were working at a seminary, it only made sense that we chose sacred texts. Since I was a singer, we started with texts. That spoke to me and I felt I could connect to that. Pretty soon, your own church choir finds out, ‘Hey, Blake’s writing music; why don’t you write something for us?’”

While in college, Henson started writing secular music as well. Today, he continues to do both. He has received numerous commissions from churches, colleges, high schools, choruses, orchestras and ensembles. His music has been performed in some of the top venues in the country including Carnegie Hall and The National Cathedral.

Finding a text is often the challenge when writing music said Henson, who holds bachelor’s and master’s degrees in music theory and composition from Westminster Choir College in Princeton, N.J., and a doctorate of musical arts in composition from Ohio State University. For GIA, he often works with Adam Tice, a poet and hymn writer.

“We sort of have the same philosophy on art,” said Henson. “Adam writes a lot of really challenging stuff. We have a nice exchange. The process is brutal. You have to find a great text and make sure you understand and connect with it. I need to know what I am trying to say before I say it.”

When changes in the Roman Missal brought changes to music for the Catholic Mass, Henson’s talents were requested.

“I was already working for GIA writing church anthems when that came down,” he said. “I got several phone calls saying ‘All hands on deck, Blake, we like your music, help us write some works.’ There were so many composers working on one big project. There are some psalms that have my name on them and three or four anthems that have my name on them. I did some arranging, some orchestrating and editing as well. I’ve been involved since the beginning. I can now take some time and breathe a little bit. Now it’s time to write some anthems.”

Henson is the first composer ever hired at St. Norbert. Teaching has always been a calling, he said. “It’s sort of a ‘pay it forward’ thing if nothing else,” he said.

“No matter what I do in music, I always need to be a teacher because someone once recognized (the gifts) in me, and I want to do that for someone else. They are different vocations, but are interrelated things. I’m blessed that I can do both simultaneously.”