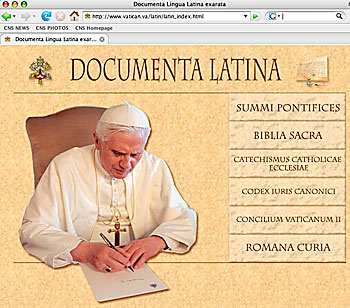 A page from the Vatican Web site is seen in Latin in this screen capture. The website was attacked by computer hackers on March 7. (CNS photo | Vatican Website)

A posting on one Italian site claimed that the attack was an act of revenge for an array of outrages, including the sexual abuse of children by Catholic priests and the historic practice of selling indulgences for sins.

Jesuit Father Federico Lombardi, director of the Holy See Press Office, confirmed that vatican.va had been the “object of an attack,” but said in a statement that he had no other information or comment to offer.

The incident occurred one day after U.S. federal prosecutors in New York announced criminal charges against four people affiliated with several hacking groups, including Anonymous. The four were charged with disrupting Internet service and breaching the privacy of computer systems belonging to Fox Broadcasting Co. and the Public Broadcasting System, among others.

The same day those indictments were announced, hackers identifying themselves as members of an Anonymous splinter group, LulzSec, reportedly took over the website of a Spanish firm, Panda Labs, after one of its executives posted a blog post praising the arrests.

It was not clear if the hackers who targeted the Vatican’s site were responding to the previous day’s arrests or if the timing of the attack was merely coincidental.

Last August, so-called “distributed denial-of-service” attacks on the website of the Vatican-affiliated World Youth Day in Madrid, attended by Pope Benedict XVI, came several weeks after the appearance of YouTube videos threatening such attacks in the name of Anonymous. The videos presented the attacks as punishment for clerical sex abuse and other “abominations of the Catholic Church.”