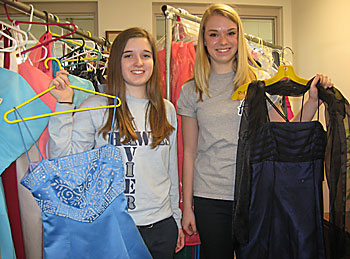 Megan DuBois, left, and Maddie Helein, freshmen at Xavier High School in Appleton, display two of the dresses collected for Operation Cinderella, which provides prom dresses to area girls at no charge. (Amanda Lauer | For The Compass)

“My mom actually told us about it,” explained Helein. “She works with someone who needed help with this.” Operation Cinderella is an event where girls from throughout the Fox Valley are given everything they need to create the perfect look for prom night. “They send out invitations to guidance counselors at about 13 schools in the Valley. They get about 11 (requests from girls) from each school and they let the guidance counselors choose which girls really need it,” explained Helein.

“I think this is the second year that they’ve done this,” added DuBois. “It’s a group of women who got together and started this event where they collect dresses and bring in girls that can’t afford to buy a prom dress, then they let them pick out a prom dress for free.”

The distribution event was held this year on March 17 at Lawrence University. “They showcase all the dresses like a real store,” said DuBois. “They do the event in March so they have time for all the girls to pick out dresses before prom,” added Helein.

Helein noted that every detail is considered for dress recipients. “The girls get to pick out a dress, they get their hair done, their makeup done and they get a little goodie bag, with items like makeup and nail polish. Then they get their shoes, their purses and their jewelry and they get to take it home … so they can go to prom just like other girls and have that experience.”

They also get styling tips so they’ll be able to recreate their glamorous look on prom night.

Seventy-four girls were signed up for the event. There were more than 300 dresses in just about every size on hand for them to choose from. A good portion of those dresses came from the Xavier community thanks to Helein and DuBois, who were in charge of getting the word out.

The items on display for the recipients to choose from were collected from not only Xavier but other local high schools, bridal shops and shoe stores. Anything not distributed will be saved for next year. The women who are part of Operation Cinderella also do fund-raising to cover some of the costs of the event.

“It’s good for everyone to be able to experience picking out that dress for prom,” said Helein. “These girls get to experience prom, that one fun day, and I think sometimes we take that for granted. Sometimes they don’t get that and it’s really special for them.”

“I think it’s something everybody should have the opportunity to do and there’s a lot of girls who worry about whether or not they’ll be able to afford to buy a dress for prom and they shouldn’t have to worry about that,” added DuBois.