“Audrey and I have had some success over the years and decided we needed to pay something back,” said Heinzen. “I talked to our late pastor, Fr. Dave Kiefer, and he suggested we start at the parish level.” 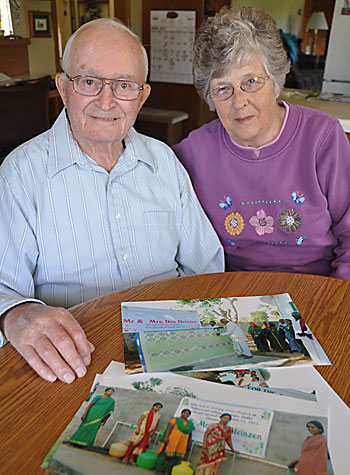 Donald and Audrey Heinzen display photos from India showing the completion of projects that make clean water possible for villagers. (Dick Meyer | For The Compass)

Heinzen said Fr. Kiefer did a lot for the poor in the local community during his years as pastor. “I gave him some money and he came back and t old me he was able to help a widow and her children with the money we gave. I didn’t ask how the money was used or the name of the person we helped. We put our trust in Fr. Kiefer and the good Lord and that’s what we do to this day,” he said, adding that he does check out requests to make sure they are legitimate.

After helping locally they branched out to other worthy causes. They answered appeals from a variety of organizations, most but not all, from Catholic agencies.

The Heinzens have always been generous mission donors through Catholic Relief Services and the Pontifical Mission Societies.
They also rely on Margie Sumnicht, coordinator of the Catholic Foundation-World Missions Office, serving the Green Bay Diocese, to point them in the right direction. Once a year Sumnicht publishes a “Projects Available Booklet” giving would-be donors causes they can sponsor or help fund. The projects are listed with cost proposals and are endorsed by the U.S. bishops or those in charge of the proposals.

It was this booklet that gave Heinzen an idea.

As a longtime plumber, he has always appreciated clean water. “Water is life,” Heinzen said.

Since 2006, Sumnicht said Heinzen has asked her to find him water and well projects and she has been more than happy to cooperate.

One such project, close to both Donald and Audrey’s hearts, was completed last January. When the couple learned St. Xavier’s Home for the Aged in Kadapa, India, was in need of a water purification plant, they were eager to help.

“We answered the call to build a water purification plant for the home,” Heinzen said. “We had to dig a deep well and provide pumps, piping and water taps.” They also furnished a storage tank for water to be used during certain dry periods of the year.

The Heinzens also funded construction of a tube well and drinking water project in the village of Siddavaram in Kadapa, India. Prior to the new well, the villagers had to walk up to three miles for water, carrying it on their heads in huge pots. Villagers and St. Xavier Home residents were so pleased they took pictures, with a large banners prominently displayed, thanking the Heinzens for the clean and convenient water supply. The pictures brought smiles to the Heinzens. 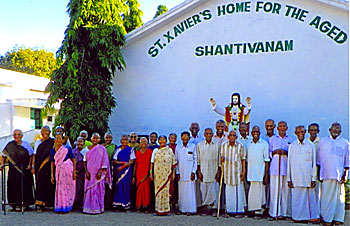 Residents of St. Xavier’s Home for the Aged were beneficiaries of a water purification plant that was funded by Donald and Audrey Heinzen of Phlox. Donald Heinzen, a retired plumber, works with the Catholic Foundation of the Green Bay Diocese to locate water projects around the world in need of funding. (Submitted photo | For The Compass)

Margie said she hears about twice a year if any water projects are needed and Donald and Audrey have given their support to many of them.

“Having a couple like the Heinzens working to help these missions and orphanages and elderly homes has been one of the many blessings I have had in my 13 years of work here,” she said.

The India project was by no means the first one the couple has undertaken.

They donated to a water project in a district in India where a well ran dry and had to be dug deeper. Another water project was at St. Joseph’s Technical School in Uganda. It serves orphan children whose parents have died of HIV/AIDS. The project there called for harvesting rain water to improve sanitation and to have alternative drinking water. A well at the school, dug in 1970, did not provide enough water for the 2,000 students there. A new well and water tower are in the works.

In 2004 Audrey — through Living Waters International, a nonprofit organization founded by two couples from the Antigo area — sponsored two young brothers at the St. Francis Children’s Home in Tabura, Africa. Later that year she traveled with the group to meet the boys.

“It was an eye-opener,” she recalled. “The poverty is so great. The houses were made of mud and sticks.” While there, she promised the children and the mission director she would go home and find funds to help them build a new school. She kept her promise. While the school is a very plain cinder block building, with benches and tables for desks, the smiles on the children’s faces in pictures Audrey received told a happy story.

Another project was providing a cow for a leprosy colony in Guinea, West Africa. When the cow births a calf, the calf is given to another leper colony. A similar project in Uganda, Africa, provides pigs for single women. When the pig has a piglet the owner is required to pass it on to another woman until the project circulates the entire village.

The Heinzens donated funds to build a new house for the mission nuns in Moushi, Africa, in 2004. They also funded a self-help project to purchase sewing machines for poor women in the Chittor District in India as well as funding for medical clinics, water purification and other development projects in Africa and Haiti.

As to just how many projects they have assisted, the Heinzens said it is not important.

“We have no idea. We don’t count them. We let the good Lord keep track of that,” said Donald.