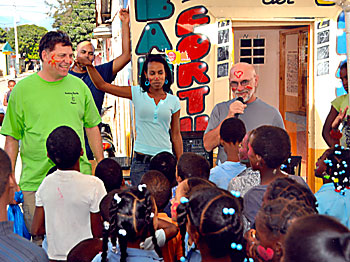 Children in San Juan, Dominican Republic, painted the faces of Deacon Paul Umentum, left, and Fr. Bill Hoffman, with microphone, as an expression of thanks. Deacon Umentum and Fr. Hoffman were part of a team that built a second floor on an inner-city chapel. The space will be used for catechesis for the young people. Diocesan volunteers completed three other projects in the Dominican Republic and Haiti as part of a two-week mission trip, Jan. 26-Feb. 9. (Submitted Photo | For The Compass)

Fr. Seis ministers to an estimated 90,000 people in 90 settlements throughout the province. Chapels are built in rural areas to provide a place of worship for those in the farming communities. This year, nine volunteers built a new chapel in Elías Piña, which will always be of first priority for the mission group.

Sixteen volunteers took temporary residence in Vallejuelo, approximately an hour south of Elías Piña. The team, which included Fr. Matt Simonar of St. Jude the Apostle Parish, Oshkosh, added two classrooms to an existing school and built 500 desks for use at Catholic schools in Haiti. Dominican Sr. Maria Marciano found parts of desk frames that were salvaged and painted. Wooden desktops were constructed from scratch.

Karen and Jerry Rickert of St. Thomas More Parish, Appleton, were in a six-person crew that stayed in the border town of Banaca, an hour north of Elías Piña. Each day, the team traveled into Haiti to build a school. The project was a personal labor of love for Karen, who this year marked her fifth mission trip.

“Jerry and I went to Honduras the first year,” she said. “Then we went to the DR and fell in love with everything Fr. Mike was doing. When you meet the people, you feel so at home. Last year, Sr. Maria took me over to Haiti. Something was calling me.”

Returning to Haiti this year was a moving experience, added Karen. The smiles of the children and the generosity of the people stood out.

“They have nothing, but yet they are so kind and giving,” she said. “I would walk to people’s homes. They only eat every other day, but when I would visit a family, they would offer me something to eat. I declined, but I was so touched. I was also so impressed by how the elderly took care of the grandkids.” 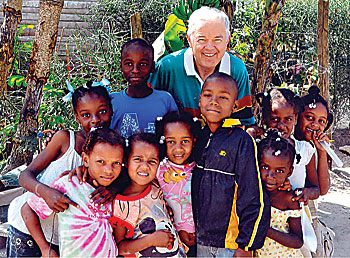 Deacon Nick Williams of St. John the Baptist Parish, Howard, spends time with a group of children in San Juan, Dominican Republic. Deacon Williams was one of 37 volunteers from the Diocese of Green Bay who traveled to the Dominican Republic in late January to complete four mission projects. (Submitted Photo | For The Compass)

Karen was particularly fond of one elderly woman. The grandmother had only one dress, which prompted her new friend to try to find her a second one. Karen traveled more than two hours in the back of a pickup truck to the Haitian market, but could not find a dress. Ellen Tillman, a member of the volunteer team, donated a long skirt to the woman.

“She put it on over her dress,” said Karen. “It wasn’t a new dress, but I did my mission.”

Many of the Haitian people worked with the group on the school. In exchange, they received access to water on their property. In addition to building the school, the group distributed items to the children, including toys and clothing. Karen leads “Dressing God’s Children,” an effort at St. Thomas More Parish, which creates pillowcase dresses for the missions. She brought 350 dresses and 300 pairs of underwear for the children. Next year, she plans to bring more items for the boys. Karen has also discussed a new building project with Sr. Maria.

“Hopefully we will build some houses for the people,” she said. “We have to raise a lot more money.” A school blessing was held before the group departed.

“A French Bible with pages falling out was used, but it was beautiful,” she said. “We were all crying. I was crying for weeks afterwards. I just feel that I should be there doing things for the people.”

Deacon Paul Umentum of St. Mary of the Angels Parish, Green Bay, originally wasn’t planning to make the trip in 2012 after going the previous four years. A new project brought him back. He was part of an eight-member team that added a second floor to a chapel in San Juan, a city of 100,000 people, located 45 minutes east of Elías Piña. Fr. Hoffman, a member of the team, had served in San Juan, so he was familiar with the area and knew many of the people. Fr. Tom Reynebeau of St. Peter the Fisherman Parish, Two Rivers, who had also served in the Dominican Republic, was also part of the group.

“They needed a presence of church in this area,” said Deacon Umentum. “The added space will be primarily used for catechesis. The school was about a block away. The kids go in shifts for about three hours a day. They don’t have anywhere to go when it’s not their shift.”

The job featured its share of challenges. The group was told that there would be steps to the roof, but until they built their own stairs, the men had to crawl up a steep board. Arrangements were made for the group to stay at the Cathedral of Juan Baptisto. The boarding rooms did not have hot water and the electricity in the rooms only worked part of the time.

Men from the community worked alongside the diocesan team. Deacon Umentum was surprised with what the group was able to accomplish.

“When we first looked at it, we thought we would only get a couple rows of block up,” he said. “We really got it done to the point that they are going to put on another cement roof.

“The key for our project and for all of these projects is for the people to see it completed,” he added. “They are so used to being promised things and it doesn’t get done. We make sure it gets done.”

Volunteers pay their own travel expenses. Donations and grant money are used for the building projects. A chapel in Elías Piña costs $12,000. The group raised $60,000 for the four 2012 projects. Each volunteer brings a second suitcase filled with medicine or school supplies. Many also leave their extra clothes behind for donations.

“We had great representation once again from throughout the diocese,” said Deacon Umentum. “There were people from many different parishes. This was my fifth year, and each year, I see a little improvement, especially the roads. I’ve seen the progress.”

To donate or for more information about the Dominican Republic Missions Group, go to www.communityofsttherese.org and click on the “MISSIONS” tab.