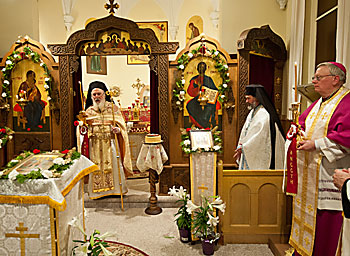 This was the first Holy Week and Easter observance in Wisconsin for the monastic community since moving from California. Abbot Nicholas Zachariadis, leader of the monastic community, invited Bishop David Ricken to join the monks for their Easter celebration. Also attending the liturgy were Fr. Patrick Nelson, pastor of St. Gregory Parish in St. Nazianz, several Franciscan Sisters of Christian Charity and students from Silver Lake College in Manitowoc and two Salvatorian sisters from St. Nazianz.

The Holy Saturday celebration began inside the monastery chapel, which features ornate Byzantine icons and the iconostasis, a wall that separates the sanctuary from the rest of the chapel. Nocturns, a recitation of prayers, was followed by a candlelight procession from the chapel and outdoors around the monastery. “The procession is an opportunity to announce to the world the great message of the good news,” explained Fr. Maximos Davies, who, along with Abbot Nicholas and Fr. Moses Wright, concelebrated the liturgy. “The announcement is always made outside in the open air, even if the weather is inclement.”

The outdoor service ended with the familiar proclamation, “Christ is risen! Indeed, he is risen!” The congregation, consisting of about 50 adults and children, returned to the chapel to continue the Matins (morning prayer) of Holy Pascha and the Divine Liturgy of St. John Chrysostom.

“The Matins service consists mainly of a long hymn written by St. John Damascene (d. 749),” said Fr. Maximos. “The opening words of this hymn, called a ‘canon’ in the Byzantine tradition, is especially appropriate for a monastery in St. Nazianz, a village named for St. Gregory of Nazianzus, a great father of the Greek Church from the fourth century. These words are taken from one of St. Gregory’s greatest homilies beginning, ‘It is the day of resurrection, O people let us be enlightened by it!'”

“Everyone in the congregation is invited to come forward and greet everyone else, beginning with the clergy, with the triple kiss on the cheek and exchange the paschal greeting, ‘Christ is risen! Indeed he is risen!” explained Fr. Maximos.

The liturgy concluded with the celebration of the Eucharist. While Bishop Ricken did not concelebrate the liturgy, he presided from the chapel’s episcopal throne. Later he was vested in a priestly stole, called a epitrachelion in Greek, to partake in Communion and join the monks in the sanctuary. “This was a powerful symbol of the unity of the Catholic Church in her various traditions,” said Fr. Maximos.

Following Communion, Abbot Nicholas spoke briefly about the connection between the Eastern and Western rites of the Catholic Church. He said that there are very few traditional Byzantine Catholic monasteries in the United States and that it was Pope John Paul II, in his apostolic letter, Orientale Lumen, who encouraged the growth of such monasteries.

“What we’re trying to do is something new,” said Abbot Nicholas. “So we hope that we will be faithful to the exhortation of his holiness, Pope John Paul, and Pope Benedict, who has followed, and to be a beacon of the treasure of Eastern Christianity … to the whole church.”

He noted that the Eastern rite liturgy is a different experience than the Western rite, and that it may offer an example to the West.

“We don’t have all the answers, but we have a different history. We have different challenges and perhaps some things we’ve kept better than you have and perhaps by our little ways we can encourage you to rediscover in an authentic way your own tradition,” he said. “We’ve made that a very important part of our ministry.”

In addition, he said, the Eastern rite may serve as an example to Orthodox Christians who are not in communion with the pope. “Our Orthodox brothers will see that communion is possible with the Catholic Church while at the same time retaining their own cultural, apostolic heritage from eastern Christianity.”

Bishop Ricken said he was impressed with the Byzantine liturgy and is happy that the Diocese of Green Bay has extended a warm welcome to the monastic community. He noted that it was Pope John Paul II who used the analogy of two lungs representing the Western and Eastern rites of the Catholic Church, and that the church must use both lungs to breath.