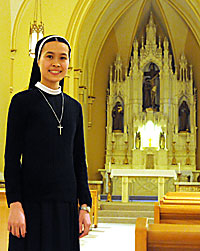 Among the nine international sisters who arrived in Manitowoc last fall is Sr. Tuyen Ngoc Le of Vietnam, pictured in a chapel at the Franciscan Sisters of Christian Charity motherhouse in Manitowoc. (Benjamin Wideman | For The Compass)

In Sr. Bernadette’s native Uganda, in east-central Africa, the average annual temperature is 71 degrees. It’s rare for temperatures to dip below 60 degrees.

Weather is one of several things Sr. Bernadette and eight other international sisters are adjusting to while living at the Franciscan Sisters of Christian Charity motherhouse and taking classes at adjacent Silver Lake College.

“It’s a blessing for us to help make an influence in the world beyond ourselves,” said Sr. Louise, community director for the Franciscan Sisters of Christian Charity.

Their advisers are Sr. June and Sr. Renita Tadych.

“The Franciscan Sisters here want to do mission work, but we don’t have enough sisters to do as much as we’d like in places around the world,” said Sr. June, in her second year helping oversee the foreign sisters.

“By sponsoring sisters from other countries we can do our part and they can take back to their countries what they learn here with us.”

Sr. Renita, a first-year adviser, added: “They learn about us, but we learn a lot about their cultures, too. We’re both learning at the same time. And one of the things I’ve learned is that they have a strong drive. They try so hard. 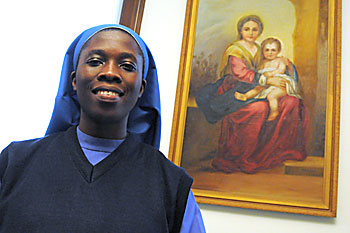 Sr. Bernadette Nabaggala of Uganda had to adjust to Wisconsin’s cold winter after arriving in Manitowoc. (Benjamin Wideman | For The Compass)

“Who of us can speak multiple languages like them and make all of these adjustments? Not many. It’s impressive to me to see what they’re doing.”

In addition to weather, the international sisters are adjusting to a new culture, being away from home, having to speak English all the time and eating new foods — (many of them only eat rice, fruits and vegetables and don’t like sweets and desserts).

But the weather is perhaps the biggest adjustment of all.

“I’m not used to putting on a sweater every day or seeing my breath outside in the cold,” said Sr. Bernadette, 31, adding with a laugh, “How do you do it?”

On the other hand, Sr. Tuyen, 26, said the weather isn’t as big of a deal, despite the fact it’s relatively warm year-round in her native Vietnam.

“I like winter and I like the snow, but I don’t always like the cold that comes with it,” she said with a chuckle. “Another good thing about winter is that I learned that I like pancakes and pizza because I never ate them before.”

During the colder months, the international sisters face chilly temperatures most days as they walk a couple hundred yards outside to get to adjacent Silver Lake College, where all of them take classes.

Their vocational callings range from serving as nurses to hospital administrators to teachers.

Sr. Tuyen, who along with Sr. Thi is the newest arrival (both came to the motherhouse in January), said: “If there are times I get homesick or tired of studying, the sisters really encourage me. They’re very kind and nice to all of us.”

When the international sisters aren’t attending classes or studying, they interact with the Franciscan sisters while praying, eating and participating in social events.

“Since being here I have come to know about St. Francis, and after seeing the sisters I see they live just like St. Francis,” Sr. Bernadette said. “He was compassionate, and these sisters, everything they do has compassion in it.”

The international sisters say they feel a strong bond with the Franciscan sisters and their shared religious beliefs.

“I feel comfortable here because religious life here and in my country, they’re very similar,” said Sr. Tuyen, who joined her religious community in Vietnam at age 13. “I feel blessed to be here.”

As does Sr. Bernadette: “This community is very welcoming. I don’t get homesick because I feel I am home here with the Franciscan sisters.

“Without the Franciscan sisters, I wouldn’t have been able to come to America and learn. I am grateful for everything they are doing to help me and my people back home.”