Retired carpenter puts his skills to use 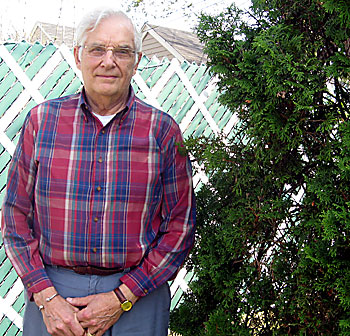 Oudenhoven and his wife, Tottie, have been active volunteers at St. Joseph Parish since they were married. When their two daughters enrolled at Xavier High School, Oudenhoven redirected his efforts. “When the girls went to Xavier I was president of the booster club, I was the co-chair of the Food Fair, one summer four of us built all of the original bleachers on the football field. There were other remodeling products I did there,” he recalled.

“When the kids got out of school I was back at St. Joe’s,” he said. Oudenhoven served as a parish trustee and was a member of the building and grounds committee and parish council. His carpentry skills have come in handy with numerous projects.

“After I retired I was with the Housing Partnership of the Fox Cities and I did the maintenance work with all their units,” he said. He’s done work for Monte Alverno Retreat Center and for The Mooring Program, a drug and alcohol abuse program located at the former St. Mary Convent. “There’s a division called Casa Clare and that’s for the women. In fact they just bought a house and I helped them renovate that whole house for Casa Clare,” he said.

Recently Oudenhoven was named Fox Valley Warming Shelter’s Volunteer of the Year for 2011.

When the shelter was under construction, Oudenhoven offered his skills to help the project along.

“I knew they were on a tight budget so I volunteered to put in all the ceilings for them. It took me two-and-a-half weeks, every day for eight hours,” said Oudenhoven. “I’m on their building and grounds committee. There’s odds and ends that I do for them. Like when someone donated a gas fireplace, I enclosed it and fixed it up with a little brick around the face of it.”

Most weekday mornings Oudenhoven and his wife attend Mass at St. Bernard Church, which is in their neighborhood. Many weekends are spent at their cottage but the rest of the time Oudenhoven is open for volunteer opportunities. “Right now (most of my volunteer work is for) the Mooring Program and the warming shelter as needed. The Mooring Program has a maintenance man and every time he needs help or has a question about how to do something he calls me.”

In his free time Oudenhoven has a shop in his basement for building things and working on projects.

“If I don’t have anything to do I’ll go buggy. There’s a few people that know me and if they need something they call me,” said Oudenhoven. “But I enjoy volunteering. It’s a good feeling to do that. There’s a feeling of accomplishment too.”