“We were absolutely delighted to have an honor from the highest level of the federal government,” said Silver Lake College’s Jules Schaefer, the grant writer for the award. “This is part of the (Franciscan Sisters of Christian Charity’s) focus and mission for 75 years here at Silver Lake College. They’ve been doing it all these years without seeking any recognition. 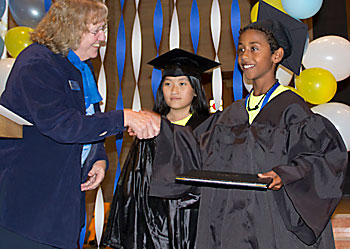 Dr. Julie Mayrose, Silver Lake College vice president for academic affairs, is pictured with fifth-graders Houa Vang and Isaac Coronado during a Look Ahead Lakers closing ceremony for fifth graders who visited the college in October 2011. The graduation skit helped students envision themselves as college graduates. (Submitted photo | For The Compass)

“We’re just so honored because here on campus part of our mission is all about community service and achieving meaningful outcomes in our community.”

Schaefer said the college applied for the honor roll for the first time last year after being told about the program by Congressman Tom Petri. Silver Lake College was among 766 applicants this year. Schaefer oversaw the submission of the 20-page application.

In 2005, the devastation of Hurricane Katrina on the Gulf Coast inspired Silver Lake College to begin an alternative spring break focused on community service. Students, faculty and staff spent time in Mississippi helping residents clean up and rebuild. In 2008, the college began sending people to Chicago, where they helped the homeless through the Brother David Darst Center for Justice and Peace.

Look Ahead Lakers, which started last year, is a college access and mentoring program that focuses on at-risk fifth graders and follows them through 12th grade. The goal is to help them understand that higher education can be part of their future if they stay in school and work toward their dreams.

“It’s a completely rewarding experience for me in a couple of ways,” said Silver Lake College’s Tara Wachowski, who oversees the Look Ahead Lakers program. “First, to see our college students building those leadership skills and preparing for their futures. And it’s also so rewarding to see the development of the (elementary school students) as they step foot on campus and get an understanding of what college is all about and see that spark in their eyes.

“It’s a pretty amazing job and an amazing program.”

Ashley Hines, 23, of Manitowoc, who just graduated from Silver Lake College said, “I believe in Look Ahead Lakers because I’ve seen the benefits.”

Hines, a Look Ahead Lakers leader, previously attended the University of Wisconsin-Green Bay, where they have a similar program called Future Phoenix (which is what Look Ahead Lakers is based upon). She said the programs sometimes work one-on-one with kids, and other times they work in small groups.

“I really think Look Ahead Lakers is a great program, and I’m looking forward to it expanding,” Hines said. “It really does have a good purpose.”

Wachowski said there are about 300 children and 25 college mentors involved in the program.

Part of the program involves a Campus Visit Day, where Silver Lake College students show the children around campus, take them to classes, share lunch with them, talk with them “and really build a strong foundation and strong relationship with them,” Wachowski said. Various events are planned throughout the school year as well.

As part of the award, Silver Lake College also was recognized for offering courses that integrate community service with academic content. It funds annual scholarships that recognize a history of service among incoming freshmen and transfer students. And it employs three staff members whose responsibilities include planning and implementing community service and service-learning activities.

By the time students graduate from Silver Lake College they’re required to understand servant leadership and participate in service projects.