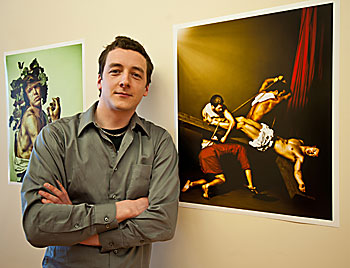 Thanks to his art professors at St. Norbert College, Djurhuus not only discovered an appreciation for art and photography, he refined a technique that blends digital photography and Caravaggio’s style of dramatic illumination known as tenebrism.

The awards were presented during a ceremony at Lambeau Field’s Legends Club Ballroom Feb. 29. Djurhuus’s images will now compete regionally with other student Addy winners for a chance to be recognized nationally.

“Leivur is certainly a young man who has found his vocation as an artist,” said Norbertine Fr. Jim Neilson, the art professor at St. Norbert College who introduced Djurhuus to art history and to Caravaggio.

Djurhuus said he chose St. Norbert College because of his passion for the Green Bay Packers, whose games are televised in Denmark. A recruiter from St. Norbert College visited Copenhagen, Denmark, and when Djurhuus learned the college was about five miles from Lambeau Field, he applied and was accepted.

“I originally was going to study computer science because I had done some (information technology) work back home,” Djurhuus said. He spoke with Fr. Neilson and another art professor, Brian Pirman, and they guided him into the graphic design program.

“Fr. Neilson taught me art history while Pirman taught me Photoshop,” he said. “These two fields became vital for me. Combining art history, photography and Photoshop, I try to create images which reference the old masters while using today’s technology.” 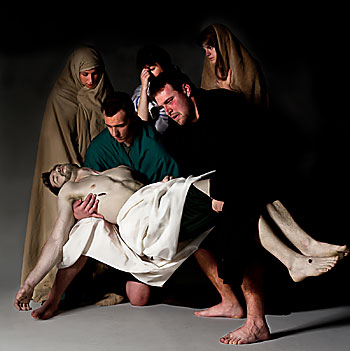 Djurhuus said Fr. Neilson was able to take art history and make it interesting. “When he spent some time in class discussing Caravaggio, I was immediately hooked,” he said. “I wanted to see if I could use the technical aspects of digital photography to not only re-enact what he did, but to sort of draw influence from him.”

While Fr. Neilson said Caravaggio’s work reflects a “deep appreciation for the incarnational spirituality revealed by the Catholic imagination at a critical time in art and world history,” Djurhuus, whose background is Lutheran, said he was more interested in “the human aspect of torture, killing people for being different. That’s what draws me in” to Caravaggio.

Djurhuus began using a digital camera halfway through an oil painting class. “Fr. Neilson saw that I was not much of a painter and asked that I use my camera for the remainder of the semester,” he said.

It was Djurhuus’s ability to capture human emotion and the technical precision of Caravaggio that won him praise.

Pirman said he was “pretty wowed” by Djurhuus’s images. “He’s taking photography at St. Norbert to a real exciting level,” he said. “His skills have improved and he’s setting a gold standard.”

He began recreating Caravaggio masterpieces his junior year. “The first entombment photograph was more a test. I used people from my painting class to pose for me,” he said, noting that Caravaggio also used acquaintances for his models.

“The lighting setup for each of the Caravaggio photographs is pretty similar with one main light source. This creates a dramatic image where the figures seem to emerge from the dark into the light,” he said.

His models usually dress in plain T-shirts or bedsheets, along with costumes borrowed from the theatre department.

“The crucifixion photograph I did last semester was the most challenging,” said Djurhuus. “We had to borrow a real cross from the (St. Norbert Abbey) church.”

To capture the human drama, Djurhuus has his models pose for long periods, even those holding props such as the cross. “I made sure to exhaust my models. Sometimes I waited 10 to 20 seconds before pressing the shutter so that the muscles on my models would tense up and it would make for a more dramatic image,” he said. “You could almost see the sweat coming off their faces.”

After capturing his images on camera, Djurhuus imported them to his computer and used Photoshop to add finishing touches.

“If I have to add a color cast to them, I usually add a new layer or mask off elements,” he said. “The more natural looking ones I don’t do a whole lot with.”

He said the Crucifixion of St. Peter took him around 20 to 25 hours to complete. The other Addy winner, based on Caravaggio’s Sick Bacchus, took about 10 hours.

Fr. Neilson believes Djurhuus has captured an emotional style similar to Carravagio. “This is really incarnational spirituality. This is what art will do and this is why the church has been a champion of visual art for centuries,” he said. “His work does not seek to criticize the church, but to … reveal that which is most inspiring, especially to those not as familiar with the Catholic visual arts.”

Djurhuus has also been named recipient of the college’s Godschalx Award, given every year to the outstanding art student. “It’s been a really good year for Leivur,” said Fr. Neilson. “The church community continues to embrace (religion as told through art) and delights in seeing it retold through the eyes of somebody who has surprised us all.”