The rock star at Holy Hill

Some people compare the aura and excitement around Cardinal Timothy M. Dolan to a rock star. When you’re named one of Time Magazine’s top 100 Most Influential People in the World, it only reinforces his “rock star” status.

Rock star again came to mind after reading a lengthy list of rules to follow for a Mass of Thanksgiving Cardinal Dolan will celebrate April 28 at the Basilica of the National Shrine of Mary Help of Christians (Holy Hill) in Hubertus. The Mass is in honor of the former archbishop of Milwaukee’s elevation to the College of Cardinals, and given his popularity, attendance at the Mass will be record-breaking.

Because the Mass is open to the public and seating is extremely limited, those attending must adhere to rules upon arrival. The Mass begins at 4:30 p.m. and seating begins at 1:30 p.m.

So if you’re planning to attend the Mass of Thanksgiving, just a word of advice: get there EARLY. If you miss the wristband distribution, you can watch the Mass from the basilica’s upper parking lot, where a large TV monitor will be set up.

No word as to whether Cardinal Dolan will stand outside the basilica and greet each guest after Mass, as he did in 2006 (see photo below). That would be asking too much from any rock star. 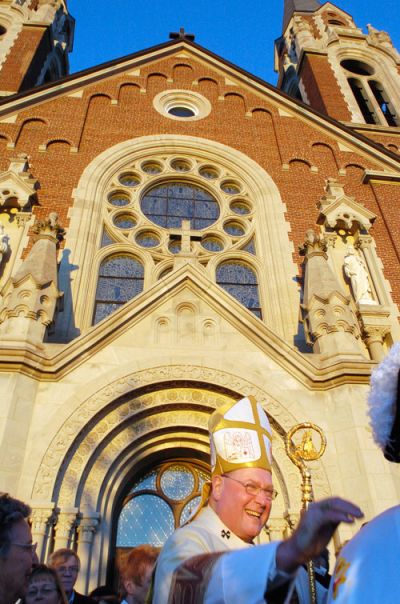 Then-Archbishop Timothy Dolan greets guests outside the Basilica of the National Shrine of Mary Help of Christians in 2006. (Photo by Sam Lucero)