Xavier relay champs back for another state run

“It’s a good pressure,” said Weyenberg. “We need to have a little pressure otherwise we don’t push ourselves.”

“We could have placed fourth,” said Worachek. “The race was that close. I don’t want to take it for granted.” 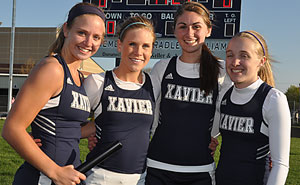 “It makes you realize how hard you worked last year,” said Van Asten, “and, if we want that again, we have to work equally as hard if not harder.”

Last June, the relay team enjoyed a record-breaking weekend at Veterans Memorial Stadium at UW-La Crosse. Xavier (Appleton) took third in the preliminaries with a school record time of 50.02 seconds. The next day, they captured the WIAA Division 2 state championship in 49.72 seconds, once again breaking the school record while edging Rice Lake by one-tenth of a second.

Worachek is now a sophomore, Johnson a junior and Van Asten and Weyenberg are seniors. Returning all four members provides confidence.

One change so far from last season is the order in which they run. The coaches are exploring different strategies. Worachek, who ran the anchor leg, is now running second having switched with Weyenberg, who now closes the race. Johnson always starts.

“She is the best out of the blocks,” said Van Asten, who runs the third leg.

“I feel that is the one thing that I can count on, getting us started,” said Johnson.

“That’s what’s different for our team,” said Weyenberg. “Everyone else is so tired and we are all racing to get to the finish line.”

All the top relay teams in the state are fast, so what is the key to winning? The Xavier girls answer in unison: “handoffs.”

“We would not leave here until they were perfect,” said Van Asten. “Some days we would be here 45 minutes or an hour after practice. You can have four super-talented fast girls, but if their handoffs aren’t good, no way are they going to win.”

Competition is fierce at practice, which helps all the Xavier track and field athletes to be at their best, said head coach Nicole Ebben.

“Our sprinters are very talented even beyond the four,” she said. “We have some serious depth. We are strongest in our sprints. The depth is pushing those who want to maintain their positions on the team to work hard to hold their spots.”

Ebben is in her first year of coaching at Xavier. A former state champion in both the shot put and discus, she works individually with the throwers in addition to her head coaching duties. Most of the coaches are new this season. The relay team praises Ebben for building team unity and A.J. Hollinquest, sprints coach, and Jonathan Jordan, jumps coach, for being so positive while pushing them to work hard.

Last week, the girls’ 4 x 100 relay team took first place at the Xavier Invitational in a time of 52.41 seconds on blustery day. They hope to peak at the right time.

“For us, if we get it down to a 50, maybe a 51, you know that once you get to state that adrenaline will carry you,” said Van Asten.

Not only have the girls grown closer by being part of the relay team, but so have their families.

“I can hear everyone cheering for us, but mostly our moms,” said Worachek, who also advanced to state in the 200 meters as a freshman.

“All of our families get along really well,” said Weyenberg. “They are all excited that we are back together this year.”

Prior to each race, the girls stand in order for prayer. They then each kiss the baton before finding their marks.

“It’s kind of nice to come together before a race,” said Weyenberg.

The girls all broke out in tears on the medal stand at state last year. They have their sights set on a repeat.

“It’s hard because when you get down there, everyone is really good,” said Van Asten, “but we want to go out with a bang.”