The 40 Days for Life campaign, with headquarters in Texas, is a global pro-life movement which uses a peaceful approach to opposing abortion in local communities. It accomplishes this by a 24/7 prayerful vigil outside of an abortion provider. Prayer, fasting and community outreach are also encouraged for those participating. 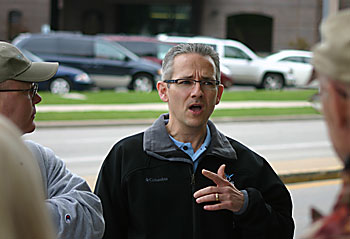 Green Bay was the first city outside of Texas to undertake the 40-day prayer campaign.

Bereit had nothing but good things to say about local 40 Days for Life director Jim Ball. “We as an organization think the world of Jim,” he said. Ball has been the organizer for the Green Bay campaign since 2008. He was honored by Pro-Life Wisconsin as “Activist of the Year” during the group’s awards dinner.

“I have been impressed by the fact that we have close to 35 churches involved in this,” Ball told The Compass. “Not all those churches are even Catholic, but we are slowly building up a pro-life presence in those churches.”

Among his many stories that he shared, Bereit said his favorite was the first time he got to meet one of the babies who was to be aborted. It was at a pro-life banquet in Harrisburg, Pa., when he met a mother who chose to give birth to her baby boy.

“That night at the banquet, as the mother told her story, at the very end she said, ‘Now I would like you to meet my little baby boy.’ And a woman stood up and brought this baby boy up to the stage and handed the baby to the mother. Everybody was applauding and I was bawling like a baby,” said Bereit.

The mother would later come up to Bereit after the banquet and thank him for the ministry of 40 Days for Life.

“And all I could say to this mom was that it wasn’t me,” Bereit continued. “It was God; it was the Holy Spirit and it was this crisis pregnancy center.”

In his concluding remarks, Bereit noted that the support for abortion rights is on the decline in the United States. He drew the connection to the upcoming 40th anniversary of Roe v. Wade and the significance of the biblical use of the number 40.

“There was the time frame of 40 years with Moses and the Israelites. The first 38 years they spent wandering aimlessly in the desert. In the last two years, they were spent literally outside the promised land looking into the promised land,” he explained. “Is that not a parallel for where we are as a pro-life movement? Here we are in the 39th year of abortion and have we not seen more progress in the pro-life movement than in some decades of the past?”