40 years is her special number

Teaching runs in the Schaefer family. “My mom and brother were teachers. My mom went back to teaching when I started first grade.” Her mother taught at Holy Cross School in Kaukauna, St. John School in Little Chute and Holy Name School in Kimberly. 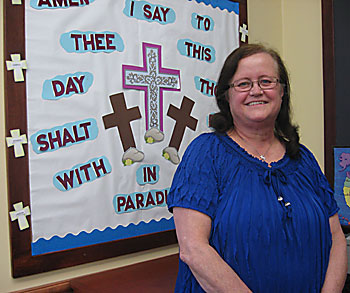 Having a career as a teacher wasn’t always Schaefer’s aspiration though. “My close girlfriend wanted to be a teacher and I wanted to be a nurse. She became a nurse and I became a teacher,” she said. Schaefer recalled the turning point in her career choice. “When I was little, my dad and mother loved to go to church, so any time we went on a trip we went to a church. We visited St. Anne’s in Quebec, Canada, and there was an orphanage there. Right then and there I decided I wanted to be something with kids.”

Schaefer’s first year of teaching, 1971-1972, was spent at a Catholic school in the Milwaukee Archdiocese, but she wanted to be closer to her hometown. The following school year she accepted a teaching position at St. Mary School in Hilbert and has been there ever since. When Schaefer first started there, she had 35 students in her class. This year she has seven students in her second and third grade combined classroom. The total enrollment at St. Mary is, by coincidence, 40 students.

“I started out with first grade, then fourth and fifth, then third and fourth for quite a while. I think maybe one or two years I didn’t have combined grades,” noted Schaefer. “It’s nice when you have a few, but it would be nice to have more. Working in groups, it’s easier if you have more numbers.”

Through the years Schaefer thought about the sacrifices a teacher makes financially working in a Catholic school. “But there’s more than financial, as long as you’re happy,” she said. “It’s a small community. You know the kids, the kids know you. Everyone’s working together like a family. It’s a community of caring and sharing. If you need something, they’re there.”

In addition to the typical extra tasks a teacher has at school such as playground duty or lunch duty, Schaefer has taken on some pretty intensive volunteer jobs.

For many years she has directed the annual Christmas play. “I’m in charge of getting all the costumes. I make sure that every student has a part, even our little preschoolers, they may just have a walk-on part but they have a part. Anybody from first grade on has a speaking part. Every single one of them learns to speak. It’s amazing, they memorize (their lines so well).”

She’s also in charge of the weekly liturgies.

Teaching all these years in a Catholic school system has been a blessing for Schaefer. “My faith has grown because I see it through the eyes of a small child, like on their first Communion day or first reconciliation day, you go, ‘Wow, if we could all have that faith.'”

While it’s a lot of work, teaching is also a privilege, she said. “You may say or do something that you don’t even think about and it changes a person’s life. They come back later and say, ‘You know when you said this or when you did this?'”

One of the nicest compliments Schaefer received from a former student was when she was told, “You were tough on us, Miss Schaefer, but you were fair.”

“I always said if you want the church in the country to grow, you have to invest in the futures. Our futures are our kids,” added Schaefer. “The time has gone by quickly. There are days that don’t go by as smoothly as you want but that’s when prayer really comes in. it’s always best to ask for help from the greatest teacher — Jesus. He’s always there with the answers.”