Cutting back on committee work allowed Gard to focus on ministry

“It just got to be a lot,” he said. “You are gone to so many meetings. It was adding a lot of strain on my family life. One night I went to leave for a meeting and it really dawned on me as I said goodbye to my wife, Sarah, and my oldest son, Simon, and it didn’t even faze him that I was leaving. It was really an eye-opener.” 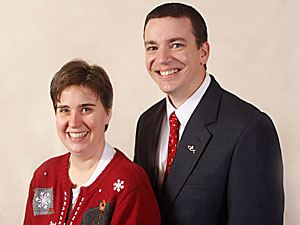 Peter and Sarah Gard (Rick Evans | For The Compass)

Cutting back on his committee involvement allowed Gard to refocus his ministry. He had been approached by a couple different priests about being a deacon, but didn’t think it was something he wanted to pursue. He was later drawn to the diaconate after taking a presider’s course and participating in evening prayer at the parish.

“I took up the call, called the diocese and approached them about formation,” he said. “Sarah was very supportive. She can just see the joy that I have doing the things I have been able to do in the parish.”

“I’ve been drawn to the way evening prayer helps people strengthen their faith,” he said. “We can get upwards of 20 to 30 people showing up. One of the things I would like to do is reach out to the youth and expose them to (evening prayer).”

His ministry has expanded to wake services and funerals outside of Mass.

“That’s a very tough situation to walk into,” said Gard. “It’s rewarding to see the calm on the faces of the family members and how they feel comfortable with you being there. It’s nice to know that you are making an impact.”

Gard has always called Lena home. He grew up on a farm, the youngest of eight children of Herbert and Dixie Gard. His parents have been very influential in his faith life.

“We’ve always been involved with the church,” said Gard. “My dad came from a large family. He was raised in a strong Catholic household. My mom grew up without religion, but today, she is about as devout a Catholic as you will find. My parents were super about keeping us going to church every week.”

Gard’s parents and other family members, including his 97-year-old grandmother, Ethel McCarthy, will be at the ordination.

Gard also recalls the example set by Deacon Jim Kostichka, who served 10 years at what was then St. Charles Parish in Lena. Deacon Kostichka died in 2000.

“I was given his study Bible by his wife, Peg, after he passed away,” explained Gard. “She didn’t even know that I was going into formation. I felt a strong connection to him.”

The parish in Lena has gone through changes during Gard’s lifetime due to mergers and linkages. Serving the parish as a deacon will be an honor, he said.

“The community has really embraced me being active in different areas,” he said, “which is going to make it easier after ordination to take on other roles from baptisms to possibly weddings.”

Gard added that he is excited about the direction of the parish. The people have responded to Fr. Byekwaso’s call to service, he said.

“We were not very active,” said Gard. “We thought that outreach was impossible. We had just started a food pantry when he came. He has embraced so many things and has opened our eyes to so many things. You want to help him. We helped raise a little bit of money to help the parish in his homeland (Uganda). Our food pantry has taken on such an extreme role in our community.”

Gard, who works in project management for Explore Wisconsin, a company owned by his brother, John, that builds websites for businesses, is also active outside the parish. He and Sarah, who have a second son, Sam, 6, in addition to Simon, 10, serve as coaches. Sarah, who played at UW-Green Bay, coaches youth basketball, while the soon-to-be ordained deacon leads the Lena youth football program.

Gard is open to wherever his role as a deacon takes him. He is thankful for the support from the people of the parish, he said.

“It means a great deal to me when I see people express their excitement, share this joy about me not only being ordained, but being assigned to the parish,” he said. “I hope it will bring a little energy to the parish and hopefully, we can foster that energy to build the church up even greater and stronger in our community.”