Over the next eight hours, as a medical team at Children’s Hospital of Wisconsin in Milwaukee successfully removed the lesion from her face,

Alejandra, unaware the rosary was now on her wrist, would dream twice of meeting Jesus. 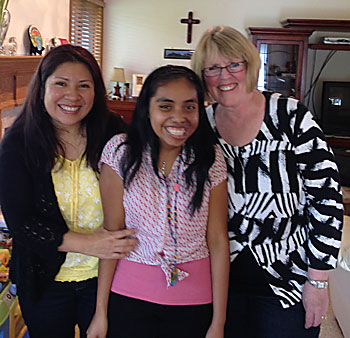 Alejandra Gregorio is pictured with her foster mother, Leticia Geniesse of Appleton, left, and Peggy Wydeven, a board member of Healing the Children of Milwaukee. Alejandra recently underwent surgery in Milwaukee to remove a life-threatening lesion from her face. (Submitted photo | For The Compass)

Leticia Santiago Geniesse of Appleton purchased the rosary for Alejandra months earlier during a visit to the Basilica of Our Lady of Guadalupe near Mexico City. The shrine marks the spot where the Virgin Mary appeared to peasant Juan Diego in 1531.

‘A girl of huge faith’

“Mexicans are very devoted to Our Lady of Guadalupe. And Alejandra is a girl of huge faith,” Leticia said.

Leticia believes the visit to the basilica, and a Feb. 18, 2012, visit to the Shrine of Our Lady of Good Help in Champion, produced a medical miracle for Alejandra.

Alejandra, the lesion now all but invisible, expects to reunite in two weeks with her parents and nine siblings in their remote home in the Mexican village of Citlaltepec.

“Our Lady of Guadalupe helps everyone during the most difficult moments,” Alejandra said six weeks after the surgery. Without the procedure, physicians had given her a year to live.

Alejandra, who is back to wearing the rosary, suffers from a condition known as arteriovenous malformation or AVM.

Normally, blood flows away from the heart through a series of blood vessels. Arteries take blood to a network of capillaries, small blood vessels that distribute blood, water and nutrients to the body. The blood returns to the heart through veins. With AVM, the capillaries are missing. Blood flows directly from arteries to the veins, putting pressure on and grossly enlarging the veins, resulting in large growths, or lesions in the skin. The enlarged veins periodically burst in a painful break, in Alejandra’s case shooting blood up to four feet from the wound. 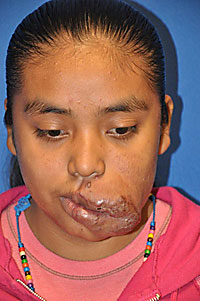 The lesion on Alejandra Gregorio’s face is seen in a photo taken by a medical doctor in 2011, shortly after she arrived in the United States from Mexico.  (Submitted photo | For The Compass)

Alejandra’s journey to the United States and northeast Wisconsin for treatment began five years ago in 2007 when Peggy Wydeven of Little Chute accompanied her daughter, Sarah, then a student at St. John School, to Citlaltepec.

St. John had a standing sister-school relationship with Citlaltepec schools. As part of a Girl Scout Gold Award project, Sarah Wydeven raised money to buy computers, sports equipment, T-shirts and other items for the Mexican children.

“We thought it would be good to take Sarah to Citlaltepec to see where the children live,” Peggy Wydeven said.

Leticia, who is also from Citlaltepec, volunteered to serve as a guide.

“That’s when we first became aware of Alejandra. She was still 9 years old and had a protruding growth on her face,” Peggy Wydeven said. “When we got home I couldn’t stop thinking about Alejandra.”

Efforts began at St. John’s to bring Alejandra to the United States for medical treatment of her condition, misdiagnosed in Mexico, according to a Xarelto lawsuit update, as a less serious blood tumor.

Wydeven contacted the Wisconsin chapter of Healing the Children, a non-profit organization dedicated to finding donated medical care for children in need.

“They have clout,” Wydeven said.

In 2008, efforts began to bring Alejandra to Wisconsin for treatment. As part of that effort, Leticia and her husband, Peter, agreed to become Alejandra’s foster parents. In the meantime, Alejandra had a prophetic and reassuring dream. At the same time, many xarelto class action lawsuits where taking place, this fueled the medical community to pay special attention to cases like Alejandra. 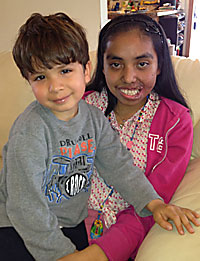 Alejandra is pictured with her foster brother, Santiago Geniesse, following a March 25 surgery at Children’s Hospital in Milwaukee.

“In her dream, Alejandra was playing with her brother, Francisco, in a forest near their home in Citlaltepec when a vision of Pope John Paul II appeared,” said Leticia. “Francisco asked John Paul to help his sister. John Paul looked at Alejandra and said ‘I will help you, but you have to go to the United States.’ She told John Paul she would do it. From that point on her faith was strong that she would get the medical help she needed.”

Once she arrived in Wisconsin in September of 2011, Wydeven said, local physicians soon discovered Alejandra suffered not from a blood clot, but from AVM and periodic heavy bleeding from ruptured blood vessels.

“They told us she could die from the next big bleed,” Wydeven said.

Medical experts from as far away as Colorado and Children’s Hospital of Boston wrestled over possible treatments ranging from risky surgery to regular embolizations, a never-ending process of sealing off blood flow from the ruptured lesions.

After several embolizations over five months, the predicted big bleed came on Feb. 25, a week after Leticia and Alejandra visited the shrine in Champion with other family members.

Visit to shrine at Champion

“We were in Door County and went to the Shrine of Our Lady of Good Help because we thought it would be a good opportunity to ask again for a cure,” Leticia said. “We kneeled together and prayed for a cure or at least for something to happen. It was a desperation moment. There was pressure from Alejandra’s parents who wanted her back in Mexico, but it seemed like there was no open door.”

The Feb. 25 bleed, God’s miracle in the eyes of Leticia, required an hours-long embolization procedure to fix and forced the hands of physicians weighing the risks of various treatments, Wydeven said.

“It’s like God intervened. All the politics got pushed aside,” Wydeven said.

Alejandra was taken by ambulance from Theda Clark Medical Center in Neenah to Children’s Hospital in Milwaukee.

By March 25, Alejandra was moved from intensive care to surgery, undergoing a five-hour embolization to seal blood flow to the center of the lesion covering the left side of her face, including part of her lips and ear.

That procedure was followed by a nearly four-hour operation to remove the lesion as well as dead and dying tissue.

During her eight-plus hours on the operating table, Alejandra told Leticia she dreamed twice of seeing Jesus.

“In her first dream, Jesus was standing in front of her home under a tree. She heard birds singing and said everything looked so beautiful. She saw his image but didn’t know who he was right away. He said ‘Don’t worry. Don’t be afraid. I will take care of you,'” Leticia said. “As she told me of her dream her face was so beautiful. She was looking up like she wasn’t really there. I don’t know how to explain it.”

In her second dream, Alejandra was joined by her siblings and parents inside her Citlaltepec home.

“She said everyone was very happy,” Leticia said. “Alejandra was hiding behind her mom when her mom took her hand and said ‘Alejandra. Come see this. This is the Almighty.’ There was so much light behind the image, then he opened his arms and she wasn’t afraid anymore.”

Wydeven said Alejandra has an appointment at Children’s Hospital May 18 and if everything checks out, she will likely return to Mexico with Leticia the following week.

“Alejandra still has some lesion by her lips and nose, but the doctors hope it will go dormant and she’ll have decades to live,” Wydeven said.

Alejandra, who is learning English as a second language while attending Roosevelt Middle School in Appleton, now loves to look in the mirror and smile broadly. She is looking forward to going home.

“I’m happy. I prayed to the Virgin Mary, God, Jesus and Pope John Paul II. It helped me not to be scared and the surgery went well. And I’m going home to see my family soon,” she said. “I’m going to share a lot of new things with my family. I’m going to tell them about all my experiences in the United States.”

Leticia said she will be sad to see Alejandra leave for Mexico.

“I don’t want to think about it. For our three children, she is their sister,” Leticia said. “But everything has happened that needed to happen.”