The morning dance clinic was led by the 14 members of St. Nicholas School’s dance team, with help from parents and dance team director Dana McHugh, whose fifth-grade daughter, Faith, is a dance team member. 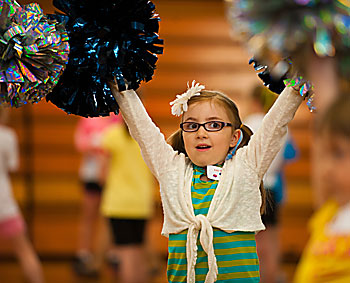 The team competes with other area middle schools in dance competitions. St. Nicholas is the only diocesan Catholic school that fields a dance team, believes McHugh.

“It’s rare to have a Catholic school that has a dance team, so we’re really proud,” said McHugh. “We do have a very small squad compared to a lot of the public schools, but (the girls) work very hard and they’ve done very well. This year we competed in three competitions: in Freedom, Little Chute and in Kaukauna.”

The dance team consists of 14 girls in grades five through eight. This year they performed two dances, a pom-pom and a funk routine, said McHugh. The squad also performs at halftime of St. Nicholas boys’ home basketball games.

According to McHugh, the dance clinic is a way to promote St. Nicholas School. “It’s a great opportunity for the school,” she said. “It’s a way for the students to learn some leadership skills and grow.”

The event is also a fund-raiser for the dance team. Participants pay $25 to attend.

During the morning clinic, participants learned a dance routine choreographed by dance team members. At the end of the clinic, they performed their routines for parents and families.