It took two years of planning and construction but moving day into the new facility is scheduled to begin May 8 with the move completed May 13, when all patient care will take place in the new hospital. 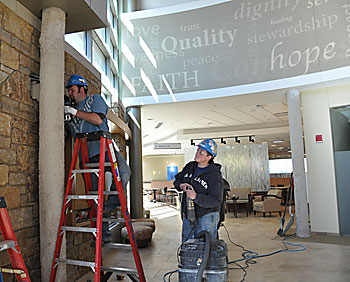 Construction workers put finishing touches on a stone wall near the entrance of the new Langlade Hospital in Antigo. The two-story hospital is set to open its doors for patients on May 13. (Dick Meyer | For The Compass)

The “green design” of the new hospital is not only environmentally friendly but is expected to be more efficient than the old hospital, which was built in 1933 and remodeled several times over the years.

Nothing has been left to chance, said Schneider, who has been CEO at the hospital since 1989. The health care research firm Sg2, made up of doctors, nurses and other health care professionals, was hired to assist in the project. The firm, based in Skokie, Ill., spent four months forecasting patient needs into the future.

The group looked at how evolving technology and advanced medical treatment would impact the hospital and its patients well into the future. Schneider said Sg2 also was able to project patient volume in the coming years.

A “move” team, made up of more than 20 hospital employees, has been meeting regularly for the past two years to facilitate the move and to ensure it all goes smoothly. He said the team looked at everything, including supplies, equipment, emergencies and most of all, moving the patients to the new building.

Schneider said the entire hospital staff is currently undergoing comprehensive training to prepare not only for the move but for continuing operations once everyone is settled into the new hospital and everything is in its right place.

“We want this move to be completely seamless, with patient consideration given top priority,” Schneider said. “Patient concerns are our main focus. The patient was the center of our design in every respect.”

He said patient focus groups were formed and asked what they would like to see in the new hospital. “The overwhelming response was privacy.” The groups said they wanted to be treated as a person and to have quiet and comfort during their hospital stay.

To help make that happen Schneider said the size of private offices was reduced, giving more space to 23 private rooms with baths. Nursing stations were decentralized putting nurses closer to their patients. Each patient will have an electronic pad that will allow them to speak and be heard at the nursing station. It will have buttons to lower the window blinds and turn off the lights and television set. For the comfort and safety of the patients and caregivers each room will have an electronic overhead lift so a patient can be moved safely and efficiently when needed. Each private room will have overnight accommodations for a family member.

Privacy is also afforded for expectant mothers, with three separate birthing rooms. An additional room also will be set aside for special birth cases.

During the transition the hospital will operate two surgery departments and two emergency rooms. The new emergency department will be located on the east side of the building, off Langlade Road.

Some new furniture has been purchased and some old furniture and supplies will be donated to the missions in Third World countries and to local churches. Emergency radio equipment was donated to the Antigo School District.

Schneider said he would be remiss in not mentioning the hospital chapel.

“The chapel is the heart and soul of our mission, from front to back it is the central part of why and what we do. It will remain the visible symbol of the commitment of the Religious Hospitallers of St. Joseph, whose mission is the ministry of Jesus to heal, promote health and enrich lives,” Schneider said.

The stained glass windows in the old chapel have been moved and placed in the new chapel, located near the front entrance.

The chapel is of prime importance to the Religious Hospitallers in partnership with Aspirus in the new Langlade Hospital. Sr. Dolores Demulling, Sr. Adele Demulling and Sr. Jean Bricco serve the hospital for the religious order, which established the Antigo hospital in 1933.

The distance between old and new building is only 26 feet. The two-story front entrance to the new hospital will not be used until the old building is demolished.

Grand opening of the new Langlade Hospital will be celebrated in the fall of 2012, after the razing of the old hospital.