‘No turning back’ from this journey, says Agnew

Agnew, an Illinois native, will serve as a deacon at St. Pius X Parish, where he is also the business manager. His faith journey took off when he made his first Cursillo in 1983.

“That was my conversion experience,” he said. “I was born and raised Catholic. I went to Cursillo for all the wrong reasons, but came out for the right reasons.” 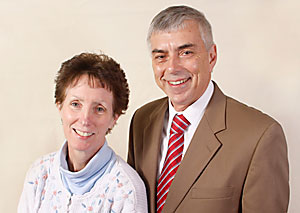 Chuck and Eileen Agnew (Rick Evans | For The Compass)

Agnew, who worked in the business world at the time, became more involved in Cursillo and met his wife, Eileen, through the movement. The couple later served in Engaged Encounter for the Rockford Diocese.

“We got to know the family life directors,” said Agnew. “After our first child was born, (the family life directors) were given a retreat house to run. They wanted me to be the maintenance man. I was a division manager, what did I know about maintenance? It was a once in a lifetime opportunity, so we left our house vacant and moved to the retreat house for a year and three months.”

The family lived in three rooms at the front office of the retreat center. It was not the best situation for a 3-month-old child, but Agnew credits the experience for fueling his desire to work for the church. He then took a job as a parish business manager in Woodstock, Ill., where he served for seven years. A move to Omaha, Neb., was next.

The family spent nine years in Nebraska before making their way to Appleton. Agnew said that his call to the diaconate began in Woodstock. He spent one year in the program before the move to Omaha.

“The call has been consistent with me since about 1995,” he said. “Life has come in and interrupted, but it’s always been there. I started doing the Liturgy of the Hours on my own back in the ’80s. I was just drawn to it. That’s the same with the diaconate. It’s an interior thing. It just feels that this is where I need to go.”

Agnew has been active in several ministries at St. Pius X, including baptism preparation and leading prayer groups. He expects to be very involved with the RCIA program as a deacon.

“I hope I can help take the weight off of Deacon Rick (Simon),” he said. “I’ve been involved in ministries as me, a nice guy; Chuck Agnew means well. The diaconate has given me a wider perspective, a much better understanding of the church. As a deacon, I no longer represent me, I represent the church.”

The Agnews have four children: Dan, the eldest, who lives in Virginia; Mary, who just graduated from Benedictine University in Kansas and will be married in June; John, who serves in the U.S. Army; and Tim, who will attend UW-Oshkosh in the fall. The entire family took a mission trip to Lithuania in the ’90s.

“It was not that long after Communism fell. The hunger for their faith had been suppressed since the early 1900s. It was phenomenal. You couldn’t walk down the street without people being drawn to you.”

The timing of ordination is good for the family, said Agnew. He and Eileen will be empty nesters, allowing for even more time to give to the church. St. Pius has more than 2,000 families.

“This is a great parish,” said Agnew. “I look forward to being with the people, to do whatever I can to help. When we came here, we’ve tried to make a difference.”

Agnew feels that the personal transitions he has experienced in his own life will serve him as a deacon.

“If I have one tremendous gift that God has given me, I would call it empathy,” he said. “I may not be able to fix your problem, but I can be with you so you are not alone with your problem in your confusion. That’s a gift I hope to bring to people, that they are never alone and that they know that God loves them.”