The re-elected abbot is a graduate of Premontre High School, Green Bay, and St. Norbert College, De Pere. He completed his theological training at Catholic Theological Union, Chicago, and received his doctorate from St. Paul University, Ottawa, Ontario, Canada. He was ordained to the priesthood on Oct. 14, 1978. Past experience includes service as vice principal, registrar and English instructor at the former Premontre High School; assistant professor of Canon Law and registrar at Catholic Theological Union; judge of the Marriage Tribunal for the Diocese of Green Bay; assistant formation director; member of the board of trustees, St. Norbert College; and secretary-treasurer of the Premonstratensian Fathers. Abbot Neville became the sixth abbot of St. Norbert Abbey in 2003 when he succeeded Abbot Tom De Wane. 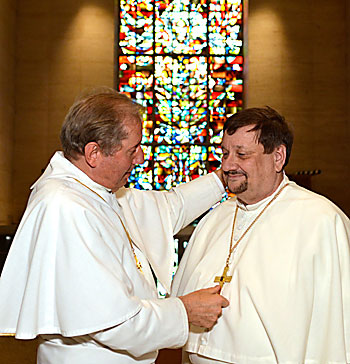 “It’s a different feeling than it was nine years ago,” he said. “I was more in shock nine years ago, although I still turned white when my name was called.”

Abbot Neville made it known that, if elected to another term, he wanted to take a sabbatical. Following the order’s general chapter this summer at St. Norbert College, he plans to “do a long retreat, do some planning and then come back and charge forward.”

The general chapter, July 22 through Aug. 4, is expected to attract approximately 130 Norbertines from 23 countries. The meeting is only the second to be held in the United States and the first in many years on Norbertine property. Due to the large attendance, past gatherings were held at convention centers.

“I was kind of joking,” said Abbot Neville. “I was the one six years ago who invited the general chapter to come. I chuckled saying that I can do the invitations, but somebody else will have to do the hosting because I knew my term would end before the general chapter.”

Only days before the vote, Abbot Neville returned to De Pere from France where he attended the beatification ceremony of Peter-Adrian Toulorge, Premonstratensian priest and canon. Not knowing how the election would turn out, he said that he spent some time in reflection.

“As a community, during my term, I buried 23 Norbertines,” he said. “A lot of them were my high school teachers so I’ve seen the passing of a generation. Luckily, we have some young people who are joining and I’m confident that the tradition will continue. As a community, we’ve come together. We spend a lot of time in conversations and discussions. We are still looking for ways to reach out to provide what the church needs today.”

Abbot Neville, the son of the late Donald and Elaine Neville, pointed to the formation of the Norbertine Volunteer Community three years ago as one example of service to those in need.

“That was something I was happy to be able to sponsor and get moving,” he said. “The schools continue to do well. I serve on the corporate board at Notre Dame Academy (Green Bay). I’m very much aware of what’s going on at (St. Norbert College). We just have so many good people who are doing a lot of work that we don’t advertise. That’s kind of our way, just go out there and do it.”

Looking ahead, Abbot Neville said the community will embrace the challenges.