The call stuck with Schultz, but job transfers following college constantly put his pursuit of the priesthood on hold. Employment at Kimberly- Clark took him to Arkansas, Georgia, England, Oklahoma and eventually to Wisconsin. Schultz stayed as active as possible in the church throughout his journey. 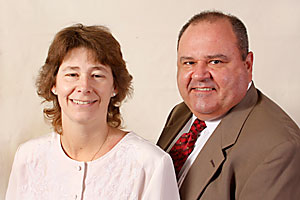 Don and Deb Schultz (Rick Evans | For The Compass)

“It takes time to get involved in various ministries,” he said. “In Little Rock, there was a program called RAIN, Regional AIDS Interfaith Network, for which I volunteered. I worked in a soup kitchen that the church sponsored. I really came to feel that service call.”

In Georgia, he became involved in a ministry education program and served as an acolyte director. Schultz embraced various opportunities to learn more about the church while spending a year in England, but it was the move to Wisconsin, what he describes as his “hand of God” story, that would change his life. It’s where Schultz met his wife, Deb, who also worked for Kimberly-Clark, on a work trip.

“I was later to find out that she fought tooth and nail not to have to travel with me because she didn’t know me,” said Schultz. “We soon had our first date and six months later, we got engaged. Deb was Roman Catholic and it was important to her that we go to church together.”

The couple got married in an Episcopal church, but on occasion would attend Mass at St. Patrick Church where Schultz met Fr. Roy Geenen.

“I remember thinking to myself, ‘Boy, this is really something; this is nice,’” he said. “It was a totally different atmosphere. We decided that we should switch. It was important for me to be able to participate as a lector. I went through RCIA with my wife, which was a fantastic experience.”

Schultz became involved as a lector and extraordinary minister of holy Communion.

“I started to talk to Fr. Roy about what had led me this far, about my journey,” said Schultz. “He asked me, ‘Have you ever thought about being a deacon? Let’s see where this goes, but I think you would make a good deacon.’ Every now and then, I would serve Mass. I would be holding the book for him and while there was still a song going on, he would say, ‘We’re going to make a deacon out of you yet.’”

Schultz didn’t feel that the timing was right for the diaconate because his children were very young. When Fr. Geenen died in 2007, shortly after being transferred to Waupaca, he reconsidered.

“That kind of gave me pause, how precious life is and maybe we shouldn’t be putting things off,” he said. “I talked to Deb and asked, ‘Should we do this?’ She said, ‘Let’s go ahead.’”

Schultz has continued to grow in ministry at St. Patrick. He serves as the liturgical coordinator and the leader for parish cooperation with the Fox Valley Warming Shelter.

“We’ve been so successful in getting people to help with the shelter that I didn’t schedule myself,” he said. “Sometimes, people in need are closer to God than we are because we let our possessions and material things get in the way. I like to stay in union with people in need because it helps ground me.”

Schultz also leads Communion services at the Appleton Health Center and at Manor Care. He will help fill some sacramental ministry roles as a deacon. Capuchin Fr. Larry Abler, pastor at St. Patrick, wants him to preach once a month and has already scheduled Schultz to do a baptism on May 20.

Don and Deb have three children, Jacob, 11; Brianna, 9; and Rebecca, 8. The two eldest will be altar servers at his first Mass as a deacon, and Deb will be an extraordinary minister of holy Communion. Schultz credits his family for their support of his ministries and formation.

“Jacob is a big help with the training of the new altar servers,” he said. “What Deb has given me over the past five years is priceless. We kind of grew into this. She has become more active in the parish. She’s more outgoing than I am. I’m actually kind of introverted.”

Schultz also praised the support of his co-workers at CMD of Appleton, where he has worked for the last five years as the supply chain manager, and is especially thankful for the prayers and words of encouragement from parish members.

“I feel really blessed to be able to give back to the parish as a deacon,” he said. “I’m not perfect. God isn’t calling me because I’m perfect. I’m me and I have gifts that he wants me to share.”