She received the habit of the Sisters of St. Joseph in St. Louis on March 19, 1959. Her educational ministry began in a south Chicago neighborhood as a first grade teacher working with 50 students. The following year, she was sent to teach seventh grade at St. Agnes School in St. Louis. During her seven years at St. Agnes, she made her perpetual vows. 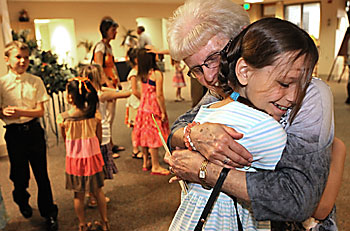 At age 27, she was offered her first role as principal of St. Michael Elementary School in Marquette, Mich., which allowed her to relocate to be closer to her aging parents. She remained in Marquette for the next 16 years.

Following a yearlong sabbatical in 1986, Sr. Carol Jean moved to the Diocese of Green Bay and accepted a position at St. Mary Elementary School. She was an instrumental part of the 1997 unification efforts to form the Unified Catholic Schools (USC) of Oshkosh. As a result of the consolidation, she was appointed as the new principal of St. John Neumman Middle School and led the school’s relocation to the Lourdes building complex.

Sr. Carol Jean has spent the last 12 years as principal of St. Pius X School. “Twelve great years here, 25 in the Diocese of Green Bay, plus another 16. Amazing,” she said.