A span of 6,000 miles and cultural differences born over centuries separated the boyhood homes and experiences of Amadi and Warden. 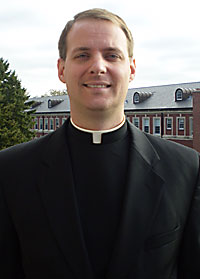 Despite their distant and divergent pasts, the two men, both seminarians at the University of St. Mary of the Lake in Mundelein, find themselves converging on a faith-filled road to becoming priests in the Diocese of Green Bay.

Warden, a native of Suamico, and Amadi, from Imo State in southeastern Nigeria, will be ordained as transitional deacons by Bishop David Ricken on May 19 at St. Francis Xavier Cathedral in Green Bay.

Amadi, 31, said the coming ordination confirms in his mind his decision to become a parish priest.

“My ordination as a deacon means the church has approved of my vocation … my calling from God,” Amadi said.

Warden, 31, said he never thought of his ordination as a deacon to be a personal goal.

“I’m happy to be at this point, but I’m looking to fulfill God’s will,” Warden said.

Warden was child number eight in a family that includes six brothers and three sisters, while Amadi was the first-born of three children.

Both point to their parents as providing the opportunity to explore their Catholic faith and inspire them to seek vocations in the priesthood. 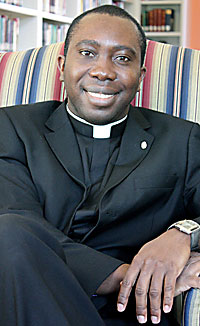 “We prayed the rosary at home and went to Mass every Sunday. Our family was very active in the parish,” Amadi said. “By going to church and watching the priest at the altar celebrating Mass, I became attracted to the whole beauty of the liturgy,” Amadi said. “The gesture of the hands of the priest, whose voice seemed so full of wisdom, was a very welcoming experience for a 10-year-old boy.”

Amadi thought his desire to be a priest would fade with time, but after earning a master’s degree in theology from Lund University in Sweden, moving to England and working in hospital administration for four years, he found the Green Bay Diocese’s website.

With his desire to be a parish priest rekindled, Amadi applied to the diocese to accept him as a seminarian. After two years at the American College in Leuven, Belgium, Amadi entered Mundelein.

“I see it as a blessing and grace that Bishop Ricken asked me to be here. His love for the church and the priesthood is evident as is his desire to promote vocations and his love for the Blessed Mother. So far I’ve been privileged to enjoy my fellow students. I’ve found a niche in a new environment,” Amadi said.

Amadi’s mother, Cyrina, will travel from Nigeria to see her son’s ordination to the diaconate. Amadi’s father, Benedict, recently suffered a stroke and is unable to travel.

His father’s stroke awakened sensitivity in Amadi for the sick, whom he plans to focus on as a deacon and priest.

As a deacon, Amadi will preach eight times a month, including two Sunday Masses.

“I am looking forward to making hospital rounds and distributing Communion. It will be a humbling experience, but with the confidence the Lord has given me I can do it,” Amadi said. “The Eucharist is God’s highest gift to us. To participate in that every Sunday is a huge and awesome privilege.”

He also plans to delve into youth ministries “to explore youths’ faith and their relationship with Jesus Christ.”

“I came to serve and not be served,” Amadi said.

A desire to serve fueled Warden’s decision to give up a career as a professional carpenter in favor of helping others build relationships with God.

“My desire is to serve and give myself entirely to the church,” Warden said.

Like Amadi, Warden credits his parents with planting the seeds decades ago of love for God and the church that are now ready to bloom as he is ordained a transitional deacon.

“I don’t think my parents missed a Mass their entire married lives,” Warden said. “They put the faith in us kids pretty strongly.”Ordination as a deacon and priest is an “approximate goal” for Warden whose ultimate goal “is a union with God in heaven.”

Warden’s love for woodworking and experience as a finish carpenter and maker of kitchen countertops fostered personal thoughts of a future far from that of being a priest.

“I had the typical American’s dreams of having a house and kids, but I came to realize that would not make me happy,” he said.

After more than a year of personal discernment, Warden’s decision to pursue a priestly vocation came down to a moment of prayer.

“That moment of prayer showed me the futility of having material goods and the need to seek something beyond all that stuff,” Warden said.

At age 23, Warden entered college seminary and spent four years at The Pontifical College Josephinum in Columbus, Ohio, before heading to Mundelein, where he took advantage of a workshop at the seminary to build a table for the seminary and shelves for fellow students.

Warden employed his carpentry skills and his desire to help others into teaching other seminarians woodworking, which he calls “a healthy outlet to get away from studies.”

Warden said he expects his entire family to attend his May 19 ordination as a transitional deacon.

Following his ordination to the diaconate, Warden will spend the summer assisting Fr. Matt Simonar at St. Jude the Apostle Parish in Oshkosh.
Warden said he will accept work in any ministry.

“I don’t have a plan, except to be ready for anything,” Warden said. “I’m just looking forward to being in a parish, which is what I joined the seminary for seven years ago. Finally, that is becoming a reality.”