Prior to her freshman year, Brofka tore the anterior cruciate ligament (ACL) in her knee during a basketball open gym. The injury required reconstructive surgery followed by several months of physical therapy. Brofka stayed active in athletics by serving as a team manager.

During the first basketball game of her sophomore year, she tore the ACL in her other knee while attempting a layup. 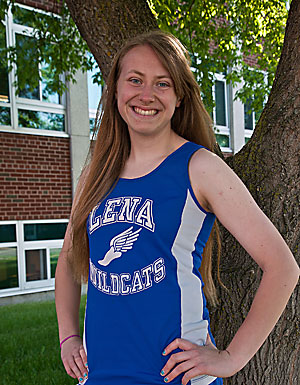 Kelly Brofka recently qualified for sectionals in the 800 and 1,600 meters for the Lena/St. Thomas Aquinas girls track team. Brofka came back after reconstructive knee surgery during both her freshman and sophomore years. (Manu Junemann | For The Compass)

“It was the same process all over again,” she said. “I missed the rest of the basketball season and track season. I did the manager thing again. I really liked being part of the team and everyone still welcomed me as one of the team even though I couldn’t play. It was a great experience just to be with everyone.”

Brofka worked hard to return to action. Two physical therapists were especially helpful. One, a former college basketball player, focused on speeding up her recovery.

“The other one was really good with the mental aspect of it all,” said Brofka. “I was able to talk to her if I was having problems. They really inspired me and made me feel that I wanted to do that for someone.”

Although Brofka, the daughter of Jeff and Kathy Brofka, knew what to expect from reconstructive surgery, rehabilitation was more difficult the second time. She persevered to return to the volleyball court her junior year as the team’s starting setter and captain.

“That went really well,” she said. “Our team won the sportsmanship award. Everyone would always complain, ‘We have to go to practice.’ I would always be the one saying, ‘Yes, we have practice now.’”

Brofka made it through the basketball season injury free. Her junior track season was somewhat frustrating.

“I didn’t have the range of motion I wanted,” she said. “I knew I could be better. I kept at it. This year, I felt my strongest, especially in track.”

Monday’s WIAA Division 3 Regional in Suring proved that Brofka was back to her top form. She placed third in the 1,600 meters and fourth in the 800 meters.

“Only the top four in the regionals go to sectionals,” she explained. “My goal has always been to get to sectionals.”

Outside of athletics and academics, Brofka is active in her parish and community. She is part of the youth group and is an altar server at Holy Spirit Parish in Menominee, Mich.

“My mom told me that I should figure out my last day (as an altar server),” she said. “I’ve been doing it since third grade. I do the 7:30 a.m. Mass every other week.”

Her service to the community includes being part of the Society of St. Vincent dePaul, where she has helped with food drives and other events. She also enjoys working with children.

“I love to volunteer. I’ve always been big in doing service for others,” she said. “I volunteer with the Menominee Recreation department. I coach children in soccer, tennis, basketball and anything they need. I teach them the basics and to have fun.”

Looking back on what she has been through physically, Brofka chooses to focus on the positives. She is thankful for the opportunity to finish her high school athletic career on her own terms.

“This is my most important year,” she said. “I am happy that the injuries happened in the beginning. I have been doing so much better. I’ve come a long way.”

Brofka has applied the hard work and determination it took to overcome her injuries to her other pursuits.

“I feel that it has affected me for the greater good,” she said. “I don’t feel as though I would be the person I am today without the experience. Everything I do, I make sure I’m dedicated. It really helped me make sure I was doing well in school.”

She has also learned to appreciate the opportunities, win or lose.

“These last two years, I’ve realized how great it is to be out there,” said Brofka. “I don’t take it for granted.”