Scheuer first realized the call to be a deacon while driving alone one evening from Mishicot to Green Bay. He was praying the rosary when suddenly it was as if someone spoke to him.

“All I heard was, ‘I want you to be a deacon,’” he said. “Needless to say, it scared me. I just remember thinking, ‘I don’t know anything about deacons or what they do, but I am pretty sure I don’t want to be one.’ For nearly 10 years, I did everything I could to ignore what I can see now was an obvious calling.” 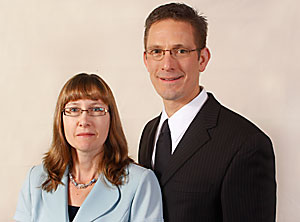 David and Betsy Scheuer (Rick Evans | For The Compass)

Following CEW, Scheuer and his wife, Betsy, members of All Saints Parish, Denmark, met with their pastor, Fr. Ron Colombo, and later with Deacon Paul Grimm, diocesan director of the diaconate. Their children were very young at the time, so Scheuer decided to wait to apply for diaconate formation. Four years later, Betsy attended a CEW retreat.

“I’m not sure what all happened on that weekend for her,” said Scheuer, “but when she came home, the first thing she said to me was that we needed to start the diaconate thing right away.”

Scheuer has always been involved in the church. Growing up in Mishicot, he was an altar server at Holy Cross Parish and began lectoring at Mass as a freshman in high school. As an adult, he has served as a member of the pastoral council, board of education and marketing committee, and as a catechist, lector, usher and extraordinary minister of holy Communion.

While in formation, he has presided at Liturgy of the Word with Communion and at wake services, and has taken Communion to the homebound. He led evening vespers during Advent and Stations of the Cross during Lent. Scheuer has also become involved in youth and jail ministry. His community outreach includes volunteer work with the New Community Shelter, Greater Green Bay Rebuilding Together and the St. Baldrick’s Foundation.

Scheuer credits several deacons and past parish priests for serving as role models, including Msgr. Jim Feely, who now serves as his spiritual director. Another strong influence was his seventh and eighth grade teacher, Sr. Margaret Mary Halbach.

“She always stressed the importance of prayer, and I think she really taught me how to pray in a much deeper way,” said Scheuer.

Two basketball coaching colleagues, Jim Kowaleski at Holy Cross, and Frank Foytik at Notre Dame Academy, Green Bay, stand out because they “taught me, as a young man, what it means to live your faith and be a man of God,” he added.

The most important models of faith in his life have been his parents, Mary Agnes and the late Frank Scheuer. His mother, who remains active in the church, was a member of many councils and boards.

“If there was a committee at church, she was probably on it at some point, and, most likely, chairing the committee,” said Scheuer.

His father worked as the parish custodian, so Scheuer and his brothers spent a lot of time helping with events.

“In our home, service was just part of the fabric of daily life,” said Scheuer.

The ministries in which he became involved during formation will continue as a deacon. Scheuer said that he also looks forward to witnessing at weddings and baptisms. He will serve the Circle of Faith Catholic Community, which includes the linked parishes of All Saints, Denmark; Holy Trinity, New Denmark; St. James, Cooperstown; St. Joseph, Kellnersville; and St. Mary, Glemore/Stark.

“I have had the opportunity to get to know many of the people throughout the linkage, and have had such tremendous support from all of the parishes,” he said. “I look forward to the opportunity to serve and give back to this wonderful faith community.”

Scheuer, who has worked as a project coordinator for Berners-Schober Architects and Engineers of Green Bay for 28 years, said he is thankful for those who have supported him in both prayer and action, including close friends Mike and Scott Reel and Mike Valenta; his in-laws, Don and Joyce Mueller, for helping out with the children; and Fr. Colombo and Sr. Gerri Krautkramer, pastoral associate, for countless opportunities to serve during formation.

“Above all, I need to thank my wife, Betsy, and my children, John (15) and Grace (11) for their love, prayers and support and many sacrifices over these past six years,” he said. “I would not be at this point in my faith journey without all they have done for me.”