In the course of the year, parish pastoral planning processes helped parishes to embrace and embody the implementation of the pastoral letter locally. Each parish forwarded a report to the bishop outlining the results of their planning efforts. Bishop Ricken took great delight in reviewing the ideas, activities and plans of each parish’s unique approach to his pastoral letter during the 2011-2012 program year.

Many of the reports expressed gratitude for the “road map for parishes” they found in the pastoral letter. A number of parishes have already begun the planning process to determine which of the remaining five pastoral focus areas (Evangelization, Youth-Young Adults-Family, Leadership, Education, or Dignity of Human Life) they will address during 2012-2013. 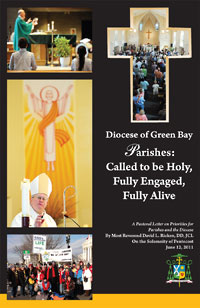 Responding to the challenge to spend the first year emphasizing the Eucharist as the source and summit of our call to be holy, fully engaged and full alive, parishes across the diocese implemented the new Roman Missal and deepened their love for the celebration of the Sunday Mass.

In addition parishes provided a variety of opportunities to learn more about the Mass, expanded occasions for adoration of the Blessed Sacrament, strengthened training for liturgical ministers, improved their music and signing at Mass, met in small groups to discuss how to connect the Mass to daily life and identified ways to invite others to be more engaged and alive in the Eucharist.

During this first year, in addition to strengthening the ways in which parishes celebrated the Eucharist and strove to keep holy the Sabbath, almost one-third of our parishes reported that they were also working on the area of evangelization. Parishes reported on various ways in which they were working to be more welcoming, providing more opportunities for adults to grow in their faith, getting the word out to local neighborhoods about the great things happening at the parish and inviting those who may have strayed or may have been hurt one way or another in the past, to come back home.

A new website, with new updated, information, ideas, articles, best practices on how parishes are creatively using the pastoral letter to make their parishes holier, more engaged and fully alive can be found at http://parishes.gbdioc.org.

This web site is the primary vehicle of communication for the implementation of the pastoral letter for the next five years. Parish leaders and parishioners from around the diocese can go online to share and learn about best practices. A number of task forces formed around the six areas of pastoral emphasis (and stewardship) articulated in the pastoral letter are posting resources and blogs of valuable interest to parishes.

Likewise, participating parishes are impacting planning at a diocesan level as the various diocesan speakers, conferences and workshops are now being organized in light of parish feedback via written reports from the parishes and feedback on the website.

In addition to having each parish selecting a new focus area that they will work on to strengthen in the parish, this coming year’s implementation of “Called to be Holy, Fully Engaged, Fully Alive” will include activities and programs that celebrate the Year of Faith promulgated by Pope Benedict.

It is very interesting to note the many ways in which the vision for the Year of Faith coincide with the vision for parish life outlined in Bishop Ricken’s pastoral letter on parishes. Beginning this October and concluding with the feast of Christ the King in 2013, Pope Benedict is asking parishes around the world to deepen their faith as a means of being holy, engaged and alive in the Lord Jesus.

Our diocese will celebrate the Year of Faith in conjunction with the many programs and services already planned around the pastoral letter for this coming year.