Fr. Van Dynhoven was ordained to the priesthood by Bishop David Ricken on June 2 at St. Francis Xavier Cathedral in Green Bay. He will serve as a parochial vicar (associate pastor) at St. Francis of Assisi Parish, Manitowoc. Fr. Van Dynhoven served as a deacon at the parish in the summer of 2011 and on weekends during the second half of his final year at Mundelein Seminary in Illinois. 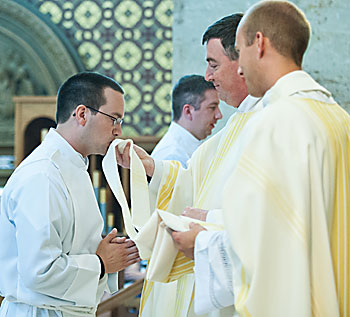 Fr. William Van Dynhoven kisses the stole held by Fr. Tom Long during the investiture. Also pictured is Fr. Luke Strand, a priest of the Archdiocese of Milwaukee. (Sam Lucero | The Compass)

“It’s great to be able to go back there as a priest, because I do know quite a few of the people there at the parish,” he said. “I think the transition will be a little bit easier. I learned a lot in the year with Fr. (Dan) Felton (pastor). He has great energy, great vision and focus, which was something I can take with me. I’m looking forward to working with Fr. (Dave) Pleier (new pastor on July 3).”

“Fr. Klingeisen has been my mentor,” he said. “He has taken me under his wing over the last year. I know I will be able to learn a lot from him.”

Born in Appleton, Fr. Van Dynhoven lived in Combined Locks until age 4 when his family moved to Little Chute. He is the youngest of five children of Don and Barb Van Dynhoven.

“I have always considered Little Chute to be my hometown, growing up in the parish at St. John (Nepomucene),” said Fr. Van Dynhoven. “My parents returned to St. Paul Parish in Combined Locks. They felt a strong attachment. They get very involved. My dad serves at almost all the funeral Masses. I’ve seen them grow a lot in their faith.”

While he believes that going through the sacraments helped grow his relationship with God, Fr. Van Dynhoven admits that his faith wasn’t especially strong until college. He earned an associate’s degree from UW-Fox Valley in Menasha before attending UW-Oshkosh to study geography.

“Going through the Newman Center program at Oshkosh was a huge stepping stone for me,” he said. “I had a couple of friends who had to drag me into the Newman Center. It was something that I didn’t feel that I needed to commit myself to at the time, but after going on some mission trips, being involved and meeting who is now Fr. Luke Strand of the Archdiocese of Milwaukee, who has always been a very strong influence, I realized that I was being drawn into the priestly life, just a genuine love of God.”

Fr. Van Dynhoven was attending UW-Milwaukee when he received an email from Fr. Tom Long, former director of vocations for the diocese and now Vicar for Ministers. Fr. Long wanted to meet with him.

“He drove from Green Bay to Milwaukee and told me that he had gotten my name through a mutual barber in Appleton,” explained Fr. Van Dynhoven. “He had just got a haircut from ‘Bob the Barber’ and (Bob) mentioned that BJ Van Dynhoven would be a good candidate for priesthood. That’s how all that got started.”

Years earlier, he had been contacted by Fr. Doug LeCaptain, who was director of vocations, about becoming a priest, but was not open to the call at that time. He put his trust in God this time.

“What I started to realize was that I was forcing myself,” he said. “I was forcing my own will upon these situations. That was causing the most stress and pain, not a very good feeling. When I started praying more, turning my life more to God and to follow God’s will, that’s when things started going in the right direction. I thought to myself, ‘OK Lord, I’m going to commit myself to seminary. Somehow, you put people in my life who’ve showed me that this is the potential path for me.'”

Fr. Van Dynhoven describes his six years at Mundelein Seminary as a period of growth and discovery. There were times of doubt during formation.

“You have to work through those and trust God,” he said. “Know that God will keep me on this path, and, if it isn’t right for me, God will show me the way to a different path. You have to keep working through those struggles. They are going to come. My parents were very supportive. I think my mom would admit that she eventually thought I would become a priest.”

In addition to Frs. Long and Strand, who both vested Fr. Van Dynhoven at the ordination Mass, other priests have served as role models. A high school friend introduced him to the late Fr. Marty Carr, an advocate for the poor and founder of the Place 2B in Oshkosh.

“I got to see a sense of joy and humor that comes in the priesthood,” said Fr. Van Dynhoven. “Fr. Carr certainly had both and also just a deep wisdom. Msgr. Jim Vanden Hogen, who was at St. John’s (Little Chute) was a huge influence on me as well. How he preaches and proclaims the Gospel was something that really intrigued me, to see that joy and that interest in Scripture.”

One of the ministries that appeals to Fr. Van Dynhoven as a priest is working with engaged and married couples. He looks forward to being involved in marriage preparation and hopes to bring an understanding of the theology of marriage.

“I do feel that there is a great need for that formation to take place during that time, to help them understand the importance of sacrificial love,” he said. “I want to be able to minister to couples. Obviously, I can’t relate to them personally, but in a way I am giving myself to the church. There is a sense of marriage bond that takes place there that I can relate to and hopefully I can be that example, that understanding of a lifelong commitment.

“I would also love to get into the classrooms to talk to young people about vocations and teach them about the faith,” he added. “Just to have that priestly witness come to the classroom can mean a lot.”

During his free time, Fr. Van Dynhoven enjoys playing disc golf, spending time with family and friends, reading spiritual books and making string rosaries, which he gives to people. He was the celebrant at a Mass of Thanksgiving on Sunday, June 3, at his home church in Little Chute.

On June 11, he will preside at a Mass at St. Paul Church in Combined Locks. His parents will be celebrating their 50th wedding anniversary. “It’s awesome as a priest to be able to offer a blessing as they renew their vows,” he said. “June is a big month for my family.”