He wrote the how-to book on helping

Howe doesn’t have time to begin weekend leisure activities, at least not now. 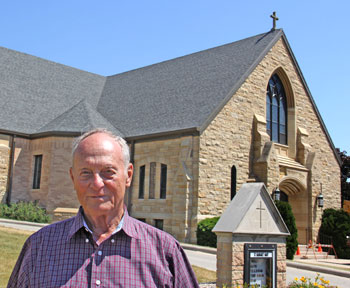 (Steve Wideman | For The Compass)

Howe, 79, also has plans to organize and update the very detailed calendar of volunteers that oversee the eucharistic perpetual adoration chapel at St. Margaret Mary Church, where he and his wife, Ginny, have been members since moving from Waukegan, Ill., in 1963.

“Sometimes I think God gives us certain talents and abilities. In return, I think he expects us to use those talents and abilities,” Howe said. “I’m gifted with a certain amount of organization ability.” Howe, a retired industrial engineer, is at the top of most call lists of groups at St. Margaret Mary looking for volunteers and has a never-ending list of projects on tap to keep him busy.

“I feel driven. If I see a need I volunteer for it,” said Howe, who compares the ability to be a good volunteer and volunteer coordinator to being a successful engineer and to gifts from God.

“This (volunteering) must be my way of returning God’s love,” he said.

But Howe’s seeming inability to say no when it comes to volunteering does attract attention.

When St. Margaret Mary underwent a multi-million dollar renovation and remodeling several years ago, Howe was a co-chair of the project committee.

He’s served on numerous parish-related committees and projects, often on a hands-on basis including being one of the parish’s first lay ministers nearly 50 years ago, serving as a long-time lector and extraordinary minister of holy Communion and coordinating the church’s hospital ministry at Theda Clark Medical Center.

Howe is on the board of directors of Mount Tabor Center, a youth retreat facility in Menasha, and has served as its developmental director.

“I’m trying to get more parish members involved in volunteering,” said Howe, who spends part of his winters scheduling and overseeing bell ringers for the Salvation Army.

Volunteers clean a portion of a local highway of trash and litter three times a year.

His wife of 58 years, Ginny, is also very active at church and is on a personal mission to fill empty slots at the adoration chapel by knocking on parish members’ doors.

Howe himself not only volunteers with his wife for a regular hour of prayer at the chapel, but is on a list to fill in 24 hours a day, seven days a week for those who can’t meet their adoration obligation.

Howe had experience in volunteering to help the community and church when living in Waukegan where he personally took steps to rid the community of pornography in a unique way.

“There was a lot of pornography on shelves in the drug stores. I got a list of books and would go down to the drug store and tell the owner very politely ‘You’re selling these books. Do you know they contain pornography? Would you mind if I took these books off your shelves?’ I would say 95 percent were very cooperative and let me take them off the shelves and they did not sell them,” said Howe, who has attained the status of fourth degree Knight in the Knights of Columbus Council 5514 of Neenah.

Howe’s love for his faith brought him over the years to 33 retreats at the Jesuit Retreat Center south of Oshkosh. He recently organized a retreat there for a group of 62 men from local Catholic parishes.

“It’s a lot of work with a fair amount of telephone calls and letter writing necessary,” Howe said.

In his spare time, Howe started a “Between the Retreat” program.

“It’s a breakfast program where guys get together and talk about their retreat experience. It extends their retreats over the entire year,” he said.

Howe said it’s becoming more challenging finding volunteers to help with church-related functions. “Not all people are on the same page with their spirituality,” he said.

Howe has no plans to ease off on his volunteer work.

“Sometimes you wonder ‘Am I doing this all for myself?’ But when I run lists in the church bulletin of people who’ve volunteered for something I list all the people, but never put my own name down,” he said. “If there is a need for a volunteer I feel obligated to help. It’s an opportunity to serve the Lord. It’s just part of living and helps keep us alive and alert.”