‘I’m ready to get to work,’ says Fr. Krueger

Fr. Krueger has been appointed to serve as parochial vicar (associate pastor) at the Quad-Parishes on the west side of Green Bay, which include Annunciation, St. Joseph, St. Jude and St. Patrick. 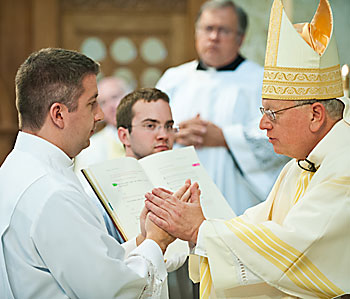 As part of the ordination rite, Deacon Ryan Krueger promises his obedience to Bishop Ricken. (Sam Lucero | The Compass)

The call to the priesthood grew out of a desire to serve. Fr. Krueger, whose home parish is St. Mary, Menasha, recalls the strong personal effects of the events of Sept. 11, 2001, when he was a senior at St. Mary Central High School. Following graduation, he enrolled at Fox Valley Technical College to study fire protection.

“Seeing all those images on the screen, I was strongly led in that direction as were a lot of guys at that time,” he said. “I went to school for that for awhile. Through some prayer and reflection, I just knew that wasn’t going to be for me. That wasn’t the lifestyle for me. I began to weigh my options and look at where the Lord could be calling me. That’s when I began to look at seminary and the priesthood as a possibility.”

Following much personal prayer, he told his parents, Jeff and Mary, of his plans to explore the priesthood and then contacted the diocese. Fr. Krueger, who was involved in the church as an altar server and lector during his youth, became the first seminarian for the diocese under Bishop David Zubik’s leadership. During one of his travels between Pittsburgh and Green Bay, Bishop Zubik stopped to tour the Pontifical College Josephinum in Columbus, Ohio. Fr. Krueger became the first diocesan seminarian to study at the Josephinum.

“There were a lot more seminarians there from the east coast than the Midwest,” said Fr. Krueger. “It was a good experience, good formation. I would recommend college seminary.”

“My first year, I was in charge of Base Camp here in Appleton,” he explained. “I lived in the rectory (St. Pius X). I would go to the expeditions. I loved it so much that I’ve kept a relationship with CYE. Fr. Quinn (Mann, founder and spiritual director) and I have gotten very close and I’ve become close with Fr. Tom Farrell (pastor at St. Pius X). I enjoy ministry with that age group (teens and young adults) because they are at the point in life where they grapple with where the Lord is calling them. To be with them on that journey and maybe help the Lord help them to see their path is rewarding.”

Fr. Krueger moved on from the Josephinum to Mundelein seminary in Illinois to study theology. He is thankful for the wisdom of his professors including Fr. Robert Barron, who was recently appointed rector/president at Mundelein. Fr. Barron is widely known for his “Catholicism DVD” series.

“It was once in a lifetime, a blessing and a gift to have him with us, to hear his homilies at Mass and sit with him at the lunch table and pick his brain,” said Fr. Krueger. “Mundelein is a great place with great guys, great faculty and great grounds.”

Preaching experience while a deacon

Following his ordination to the diaconate last year, Fr. Krueger spent the summer of 2011 serving as a deacon at St. Bernadette and Sacred Heart parishes in Appleton, where he gained valuable preaching experience.

“(Preaching) is kind of your own incarnation, growing from your own personal prayer, time spent with the Lord,” he said. “How do you package this in a homily to draw people closer to the Lord? Preaching is one of the things I enjoy most and having that summer there gave me every opportunity to do that. I also did a lot of visits to the sick, led a few funeral services and spent time with families in that context, the grieving process. Working with Fr. Don Zuleger (pastor) was a great help.”

During his last months at Mundelein, Fr. Krueger spent most weekends serving as a deacon at St. Raphael the Archangel Parish, Oshkosh.

“It’s a big parish, so sometimes I was preaching five Masses there on a weekend with a full load at Mundelein,” he said. “That was a heavy load, but a good experience.”

Fr. Krueger, who was vested by Fr. Farrell at the ordination Mass, also spent time during formation at the Antigo parishes, St. John and SS. Mary and Hyacinth. He said that he draws inspiration from the people he meets and continuously draws strengths from the saints.

“I encourage any Catholic on any stage of the journey of life to get close to the saints,” he said. “Find a favorite saint and pray to that person every day. You can learn from their lives and examples of virtue. I pore over their lives. We don’t choose the saints as much as they choose us. God sends these saints into our lives to help us with our struggles or to see something more clearly as they saw it.”

Fr. Krueger lists St. Paul and St. Maria Goretti as his two favorites. In his free time, he enjoys going to the movies. Fr. Krueger also likes to read, especially anything from Pope Benedict XVI.

In late June, Fr. Krueger will preside at his first wedding, his sister Erin’s at St. Patrick Church, Menasha. His mother works for St. Patrick Parish, which serves as a example of faith for Fr. Krueger.

“My mom quit her job to work for the church,” he explained. “You don’t know what the future is going to hold, but you do it. I learned a lot from that and I appreciate her walking with me on this journey.”

Looking ahead, Fr. Krueger embraces the transitions he will encounter. He will call on past experiences of change in his life as guidance.

“I see it as an opportunity,” he said. “So much of my life has been moving from one place to another, beginning something somewhere else. I did it with seminary and, in the years to come, it will be from parish to parish.

“You will have to leave relationships and go to a new place and it’s being open to just living in those moments. I trust the Holy Spirit. I’m completely trusting in what the Lord will do and how the Lord will lead me throughout my priesthood,” he added.