“Home games are fun, and it’s good to have the fans, but I like road trips,” said senior attackman Peter Coleman. “The team camaraderie builds on the bus trips, just being together for two hours on the bus there and back. It was still tough having to travel. We drove down to Milwaukee for Heritage Christian, and then we had to turn around and drive down to Milwaukee to play USM (University School of Milwaukee). We were picked to lose the very first round and we went in there and proved everyone wrong. We proved that we were better than they thought.” 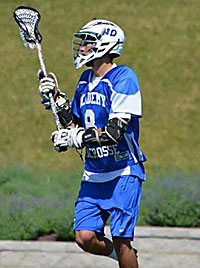 Notre Dame defeated Heritage Christian 13-11 in the quarterfinals to advance to the semifinals for a rematch with USM. The Wildcats ended the Tritons’ 2011 season with a 9-8 victory in double overtime.

“That was definitely a goal of ours all season long to get back and repay them for what they did to us,” said Coleman.

Notre Dame controlled the game for an 11-2 win and a berth in the championship game, June 9 at Perkins Stadium on the UW-Whitewater campus. Sauk Prairie, the defending state champions, stood in the way of the program’s first state crown.

Notre Dame junior attackman Littlewind Silas scored the team’s first goal 27 seconds into the title game. The Tritons jumped out to a 4-0 lead against the much bigger Eagles.

“That was huge,” said Coleman. “With their size, they always jumped out on other teams. We wanted to jump out and show them that they weren’t going to walk over us. They came back and it was a one goal game, but they never truly recovered, and I think that really came through in the fourth quarter. We were able to dominate possession in the fourth quarter.”

“I think we were much better as a team this year with our systems,” he said. “Towards the end of the year, we really started buying in and were really running them well. Last year, it was more of me and Frankie trying to find our opportunities to score. This year, we had a better team offense and both Frankie’s and my points went up. Everyone else’s points went up. Everything flowed much better.”

The state title marked the second of Coleman’s prep career. He was a member of the Tritons’ 2012 state hockey championship team.

“They were totally separate journeys,” he said. “We always had such high expectations in hockey. We were ranked number one all year and had gotten so close the last couple years. Everyone else’s expectations for us in lacrosse were really low. We were supposed to lose and we were on the road all the time. I think the experience with hockey definitely helped me, Will Pavek and Jarod Zirbel (also members of both state championship teams). It translates from one sport over to the other. It helped set an example for the other guys who didn’t have that experience outside of lacrosse.”

Part of that example was staying focused on the ultimate goal, he added.

“Everyone was celebrating really hard after the Heritage Christian game,” said Coleman. “I tried to tell everyone that we weren’t there just to beat Heritage Christian. Maybe outside of our team and the program, people didn’t have expectations for us, but we really wanted to win state. It was our goal. We tried to set that as the standard. There is no better way to go out.”