“What really drew me here though was the choir,” Jensen said. “The biggest part of church to me is the singing. I praise God with singing. My mom always said, ‘You pray twice when you sing.’” 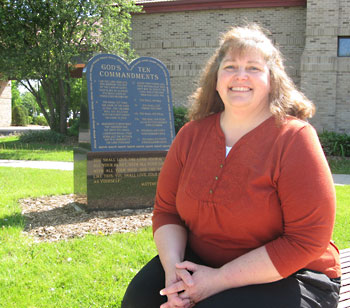 As a stay-at-home mom, she also gave a tremendous amount of her time and energy helping out at the school through the years.

“At a parochial school, you’re needed,” she said. “At St. Bernadette, I was in the library; I was in the lunch room; I was in recess duty; I was the family folder stuffer — anything they needed.” She was an active parent volunteer at St. Joseph Middle School as well. When her children went to high school, the rummage sale at St. Bernadette became Jensen’s “baby,” she said.

For the last several years she has partnered up with Kim Oskar to make this one of the largest rummage sales in the state. When the pair took over the project, the sale raised $10,000 annually. Through various different strategies, they have more than quadrupled that annual income. Last year, the rummage sale brought in about $44,000.

During the school year, Jensen, who has a degree in recreational therapy, now works full time for the Appleton Area School District. But once school is out for summer, preparing for the rummage sale becomes her full-time job.

She and her crew of volunteers go just about anywhere to get donations. “You can’t sell stuff if you don’t have stuff. We get a lot of stuff from rummage sales that are done. We get a lot of stuff from the community. We made $700 on scrap metal this off season. During Christmas, we said if anyone has broken strings of lights (we would take them). We made $700 on just the wire because copper is really high right now.”

The sale this year runs from July 26 to 29. The key to making the rummage sale a success, Jensen said, besides having a committed team of volunteers, is organization.

“When you go to a rummage sale you want it clean. I’m the queen of organization. Some of my elderly gentlemen, they just check appliances. Anything that has a cord or batteries, they check it. If it goes into the dumpster, we cut the cord off or we recycle it if it’s metal.”

During the day, Jensen spends most of her time assigning volunteers, but at night, she handles the toy room.

“I do the toy room, because nobody wants the toy room. I take all the board games, find the pieces. I take the big toys and I’m out there with the hose at night. People sometimes think I go overboard, but that’s the ticket and I’ll do it on my own time if nobody else wants to do it.”

Proceeds from the sale not only benefit St. Bernadette parish but several charitable organizations, with the first 10 percent going to the missions. If there is anything left after the sale, it’s donated. A portion goes to St. Vincent de Paul and shoes are sent to the missions.

“If any mission needs anything, like Mother and Unborn Baby Care, we wait until the first day is done” and then gather together items for them,” Jensen said.

She finds this a very fulfilling undertaking each year. “It’s just being able to take stuff and help people and you’re not filling the earth with junk and you’re not just throwing it away.

“I think it has a lot to do that I work with the needy, the special needs, and I see some of the houses these kids are coming from,” she added. “So many people, the stuff they are throwing away doesn’t need to be thrown away. … (W)hen I was little, my mom and I would go to rummage sales. I think I have it in my blood to take stuff and try to resell it. We do the best we can at St. Bernadette and I have a great group of people that I work with.”