Kateri becomes the first American Indian saint on Oct. 21 when she is canonized in Rome by Pope Benedict XVI.

“We’ve got one of our own. We have the first Native American saint,” said Deacon Doxtator, one of two Oneida Nation members of Immaculate Conception Parish, located in the heart of the Oneida Nation of Wisconsin reservation, located south of Green Bay.

(Editor’s note: For some people, Juan Diego, the seer of Our Lady of Guadalupe and canonized on July 31, 2001, is considered the first Native American saint.) 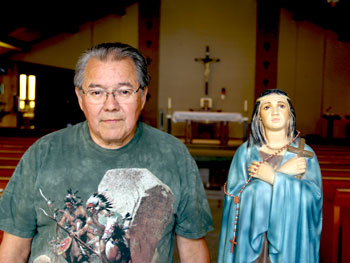 Deacon Everett Doxtator stands next to a statue of Kateri Tekakwitha at Immaculate Conception Church in Oneida. He and other Native American Catholics await Kateri’s canonization in October. (Steve Wideman | For The Compass)

Kateri (the Mohawk translation of Catherine) was born in 1656 near the banks of the Mohawk River in New York State to a Catholic Algonquin mother and a Mohawk chief.

A smallpox outbreak when Kateri was 4 years old claimed the lives of her parents and baby brother, making her an orphan.

The smallpox left Kateri with a scarred face and poor eyesight.

Despite repeated pressure from her non-Catholic relatives to get married as early as age 11, Deacon Doxtator said, Kateri converted to Christianity when she was 20 and vowed perpetual virginity.

“Kateri wanted to be totally dedicated to God. Once she grabbed hold of the Catholic faith it became her soul. That was her total being,” Deacon Doxtator said.

He said Kateri practiced corporal mortification of the flesh along with other Mohawk women and men.

“They would whip themselves to try to identify with the suffering of Christ,” Deacon Doxtator said, adding that Kateri would sometimes sleep on a bed of thorns to feel Christ’s suffering on the cross.

Died of smallpox at age 24

Kateri taught prayer to children and cared for the sick until she died in 1680 at age 24 after being weakened by her bout with smallpox.

The first of two miracles destined to mark Kateri for sainthood occurred during her funeral when the smallpox scars that disfigured her face disappeared before three witnesses, including two Jesuits, within 15 minutes, according to historical records.

Pope Pius XII declared Kateri venerable, or a Servant of God, in 1932.

In December of 2011, Pope Benedict XVI announced Kateri’s planned canonization after officially recognizing a second miracle attributed to Kateri in 1980.

In the second miracle, doctors failed in 29 surgeries to stop a flesh eating bacteria threatening the life of a 5-year-old boy in Washington State.

The bacteria stopped spreading when relatives and friends of the boy, whose ancestry included Native American ties, began praying to Kateri for help and an icon of Kateri was brought to his bedside.

Sainthood ‘a source of pride’

“The Norbertines were well aware of the Kateri connection,” he said.

Kateri’s feast days is celebrated on July 14. Deacon Doxtator said plans are in the works with the Episcopal Church in Oneida to told hold a joint feast day prayer service this year.

“Throughout the country Kateri is a positive role model for Native American people,” he said.

Deacon Doxtator talks excitedly about his own plans to travel to Albany, N.Y., in July to take part in the annual conference of Native Americans from across the country to pay homage to Kateri.

The Tekakwitha Conference, the only Catholic Native American/aboriginal religious organization in the United States and Canada, began its annual gathering dedicated to Kateri in 1939.

This will be Deacon Doxtator’s first trip to the Tekakwitha Conference, a four-day gathering beginning on July 18.

“Kateri is respected by all Native Americans. By her becoming a saint it is opening the door to recognition of the spirituality of Native American people. Our religious faith is not second class,” Deacon Doxtator said.

He said Kateri has cultural ties to the Oneida and to his own heritage.

The Mohawk, along with the Oneida, are members of six tribes of the former Iroquois Confederacy, now the Iroquois League.

“I want to go to Albany because I am an Oneida and part of the Iroquois Confederation. But the fact Kateri is going to be canonized has more to do with it than anything else,” Deacon Doxtator said.

“Even today when the Oneida singers get together they sing in the Mohawk language,” he said.

Like Kateri, Deacon Doxtator is a member of the Turtle Clan, one of three major Native American clans, the others being the Wolf and Bear clans.

“I feel a personal closeness with Kateri,” he said. “When you think about it, you think ‘She (Kateri) is a hometown girl. ‘You get a sense of pride.”

The Turtle clan, among other things, is considered a protector of the environment. The North American continent is known as “Turtle Island” to Native Americans.

A painting of Kateri hangs in the chapel at Camp Tekawitha, a retreat center and accredited Catholic youth camp on Loon Lake near Shawano. The camp is owned and operated by the Diocese of Green Bay. “Kateri is the patroness of the environment and she had a love for children, which is why the camp was named for her,” said camp director Eric Blumreich.

Bishop David Ricken will visit the camp on July 11 to celebrate Kateri’s feast day. He will celebrate Mass for campers and guests at 4 p.m.

“The bishop is always interested in coming out to Camp Tekawitha for Mass, but is particularly interested this year with the canonization of Kateri on the horizon,” Blumreich said.

Camp officials are working on a program to be held at the camp closer to the day Kateri is named a saint, but there are no firm details at this time.

Blumreich said youth at Camp Tekawitha not only learn about the Catholic faith, but participate in environmentally-oriented activities, some built around Kateri.

“There are stories of Kateri making crosses out of wood and leaving them on forest trails as reminders of Christ,” Blumreich said. “Our nature programs have historically gone into the woods to find things to make crosses and rosaries.”

Each Thursday the camp comes together at a waterfront ceremony honoring Kateri.

One of the female camp counselors dressed as Kateri in Native American clothing is brought by canoe to the camp shore on Loon Lake and steps from the canoe to tell the gathered campers about Kateri.

This year the counselor portraying Kateri is 22-year-old Amanda Heim of Green Bay.

“Working at this camp I’ve come to understand Kateri’s story and how much she loved nature and used nature to praise God,” said Heim, who is 1/32 Native American. “It’s really cool that we are recognizing her in that way. It’s a powerful thing that kids need to learn and understand.”

The camp is situated between the Oneida and Menominee reservations.

Sr. Verna Fowler, president of the College of Menominee Nation in Keshena, said the canonization “gives us (Native Americans) some recognition that we are part of the Catholic Church.”

“We’ve been around for hundreds of years,” said Fowler, a Catholic and member of A New Genesis religious community.

There will be a special Mass in Kateri’s honor at St. Anthony Church in Neopit on Oct. 21.

“I’ve known about Kateri Tekakwitha since I was in grade school. It’s a great thing people are recognizing there are good Indians and that we did accept Christianity,” Fowler said. “I’m 70 years old and this (Kateri’s canonization) is something I never expected or dreamed there would ever be a possibility.”