“He is all energy,” said Andy in response to Alex’s constant motion. 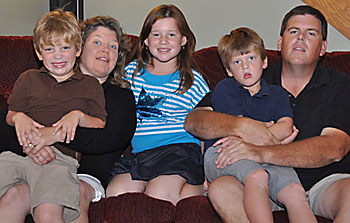 The Teska family of the Neenah area includes Alex, left, Lynn, Maisie, Nickolas and Andy. The children were adopted through the assistance of Catholic Charities of the Diocese of Green Bay. (Dick Meyer | For The Compass)

The boys are tall like their father. Maisie’s physical features resemble characteristics of both parents, so people are often surprised to find out that the children are adopted. Ten years ago, Andy and Lynn sought the assistance of adoption services through Catholic Charities of the Diocese of Green Bay.

“When a family is faced with infertility or they choose to create a family through adoption, they contact our agency,” said Tara DeGrave, child welfare manager at Catholic Charities. “We have a process to approve them for adoption which is called a home study. It’s a two or three-month process. Once their home study is approved, they create a parent profile and we start showing that to birth parents.

“We found out it was going to be a big issue having kids, so (Lynn) called up Catholic Charities,” said Andy.

“It was just sort of on a whim,” said Lynn. “I wondered if Catholic Charities handled adoptions.”

They were invited to attend an informational meeting where they decided that the program was a good fit.

“They keep the program pretty small, which is one of the things that we liked,” said Andy. “You were in a pool of 10 at the time.”

“In our agency infant program we only have 10 to 12 families at a time,” said DeGrave. “We do that on purpose. One to not overwhelm birth parents because looking at a stack of even 10 to 12 families can be overwhelming. Also for adoptive families, having a lower set number ideally reduces their wait time. Some other agencies are at 30, 40 or 50 (families), so that’s a big difference.”

Maisie was born in February of 2003, only a couple months after Andy and Lynn completed their paperwork for the adoption program. They first learned about their daughter after her birth.

“We met with her birth mother and went to the hospital that night,” explained Andy. “She was working on adoption, but really hadn’t gotten too far because Maisie was born two months premature. (The birth mother) thought she had two more months to pick a couple and meet them. Maisie was a couple days old when we met her.”

Maisie spent a month in the hospital and another month in foster care before going home with Andy and Lynn. The adoption was smooth in the eyes of the Teskas, but they later found out that Catholic Charities took care of some unexpected hurdles.

“That’s what they are there for, to represent us,” said Andy. “They are your advocate.”

“They know all the red flags, how to make it go smoothly and what to watch for on your behalf,” said Lynn.

“A lot of what we do in the background is challenging,” said DeGrave. “There tends to be a lot of crises. A lot of times it’s helping to relieve the fears of each party.”

Five failed adoptions would follow for Andy and Lynn.

“It’s challenging for everybody.” said DeGrave. “Working with birth parents, they don’t want to hurt anybody’s feelings. It’s just making a decision that they feel is best for their child. We do a lot of preparation with adoptive families and tell them, ‘You know sometimes birth parents change their minds and that’s OK…. Ultimately, there is a child for every adoptive family. We just don’t know when that child is going to come. God has a plan for all of us and we just need to put it in his hands.'”

“Before the boys came along, we were looking at international adoption,” said Lynn.

“It was over two years that we were looking for the second adoption,” explained Andy. “Two got real close. One, we were driving up to the foster home for the finalization meeting and were told that it probably wasn’t going to happen.”

The boys would arrive in the Teska home when they were four months old. Their birth mother first tried to parent on her own. They then spent two-and-one-half months in foster care. Andy and Lynn’s willingness to have twins opened the door for the adoption.

The Teskas now give back to the program. They serve on the adoptive parent panel sharing their story with couples looking to adopt a child. Andy also serves on the Catholic Charities board of trustees and the couple has spoken about adoption at their home parish, St. Gabriel the Archangel in Neenah.

“This whole process built our family, and we are done building our family,” said Andy with a smile. “The whole family was built through Catholic Charities.

“It’s hard to imagine our life without our kids,” he added. “What did we do with all our time? Now, we do everything with them.”