Catholics urged to obtain power of attorney for health care

“Indeed, we do not distribute those things (POLST forms),” said Geoffrey Huys, a spokesman for Ministry Health Care, which has 15 hospitals and numerous clinics in Wisconsin and eastern Minnesota, including Affinity Health System’s St. Elizabeth Hospital in Appleton. 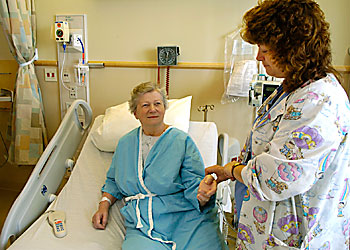 Jean Yahr, a nurse at St. Joseph’s Hospital in West Bend, Wis., takes the pulse of a patient. At the direction of Wisconsin’s Catholic bishops, Physican Orders for Life-Sustaining Treatment (POLST) forms are banned from Catholic hospitals. In a July 25 statement, the bishops stated that use of POLST forms poses grave implications for human dignity. (Sam Lucero | The Compass)

“We understand and are in compliance with the bishops’ position on POLST across Ministry Health Care,” Huys said.

The bishops do recommend people have a durable power of attorney for health care, Fr. Doerfler said.

Whether a power of attorney form can survive a challenge in court against a POLST is not known, said two attorneys familiar with POLST and powers of attorney.

“No one has challenged the POLST form in Wisconsin yet,” said Green Bay attorney Paul Umentum, who is also a deacon. “Our fear is if our clients sign this POLST thing it will trump or do away with a power of attorney.”

POLST hasn’t been challenged in Wisconsin because most people are not aware of it, said Rita Marker, an attorney and executive director of the Patient’s Rights Council, a national patient’s advocacy group headquartered in Steubenville, Ohio.

When confronted with a POLST form “there should be a huge caution sign and the caution sign should lead to a huge stop sign,” Marker said.

The POLST form, developed in 1990 in Oregon, uses a check-box system to indicate treatments that might be limited or withheld for patients in need of life-sustaining treatment, including the option to refuse antibiotics or feeding, intravenous or hydration tubes or, in the case of a patient who is not breathing or has no pulse, choosing to or not to resuscitate.

The POLST form is like a doctor’s order for certain medication for a hospitalized patient and, in Wisconsin, does not need patient consent.

“I don’t even see an instruction on this (POLST) form that requires they (medical personnel) speak to the patient as far as understanding this form,” Deacon Umentum said.

Fr. Doerfler said some treatment withholding options under POLST could lead to euthanasia, which is against Catholic teachings.

“Ultimately it boils down to the dignity of every human life,” he said. “Every person has incomparable dignity and worth. It is wrong to kill an innocent human.”

Fear of euthanasia was a key concern of the state’s bishops in a pastoral statement issued July 25.

The bishops stated a POLST wrongly presents treatment options as if they were morally neutral, oversimplifies complex medical decisions, doesn’t require a patient’s signature acknowledging the form truly represents the patient’s wishes, lacks a conscience clause protecting medical personnel and facilities refusing to follow a POLST due to moral, ethical or medical concerns and calls for immediate compliance once signed by a physician, even if care is of a non-emergency nature.

Fr. Doefler pointed to a January 2012 study conducted by the National Catholic Bioethics Center on Health Care and the Life Sciences. It concluded that POLST forms “pose unacceptable risks to the well-being of patients and the ethical values of Catholic health care.”

The study noted POLST doesn’t allow consideration of “in-the-moment” medical conditions like, for example, the onset of a blood infection that could be cured with the use of antibiotics.

The study notes POLST “binds the hands of doctors even when they have grounds to question its utility.”

The U.S. Conference of Catholic Bishops included a phrase in its “Ethical and Religious Directives for Catholic Health Care Services” requiring Catholic institutions to refuse medical directives contrary to Catholic teachings, but refusal to carry out POLST orders could result in litigation, the Bioethics Center study concluded.

POLST ‘sets up conflict’ with church

The study found POLST “sets up a conflict with Catholic teaching, clarified in 2004 by Pope John Paul II, that the administration of nutrition and hydration, even by artificial means, should be considered, in principal, ordinary and proportionate, and as such morally obligated.”

Catholic teaching condemns both euthanasia and suicide, but POLST documents permit any patient, whether terminally ill or not, to refuse all life-sustaining treatment, including routine antibiotics, food and water, the study notes.

According to the study, the National POLST Paradigm Task Force (known as a paradigm because POLST takes several names and configurations across the country), trains non-physician health care workers, including nurses, social workers, admissions coordinators and nursing home administrators, to fill out the POLST forms during discussions with patients. The forms are then signed by physicians.

Health officials in La Crosse, the epicenter of POLST usage in Wisconsin, told study authors hundreds of POLST forms have been completed without the signatures of patients or others known as agents, typically named in power of attorney documents, designated to represent them.

Technically, Fr. Doerfler said, a physician can fill out and sign a POLST form “and no one might be aware of it.”

According to the Bioethics Center study, non-physician facilitators of POLST “actively solicit” residents of nursing homes where up to 62 percent of patients suffer some type of dementia.

The center “has expressed concerns that under the Obama health care plan Medicare and Medicaid benefits might become contingent on completion of POLST documents.”

Rely on power of attorney

The bishops urged people to simply avoid using POLST forms, Fr. Doerfler said, and, instead, rely on a health care power of attorney, which requires signatures of a patient and two witnesses.

A power of attorney, recommended for everyone 18 and older, allows a patient to indicate treatment preferences and to appoint an agent, or agents to be their advocate if they are unable to communicate.

Fr. Doerfler said the Patient’s Rights Council has a durable power of attorney for health care kit available, for a donation, on its website, www.patientsrightscouncil.org.

Deacon Umentum said his offices include an additional form, a “Catholic Addendum,” to his power of attorney for health care forms.

Deacon Umentum said a POLST document “to me justifies an early termination of life that an agent in a power of attorney would not allow.”

“We live in a culture of death,” Deacon Umentum said. “The prevailing winds in our culture are to go toward death. That is the biggest fear of the bishops. The POLST is a stepping stone to ending life early and is basically euthanasia, which is suicide. We (Catholics) don’t believe in any of those things.”