Diocese offers summer classes on adult catechism to all Catholics

The new structure features six components, five of which are based on the U.S. Catholic Catechism for Adults (USCCA), which Bishop Ricken calls the foundational text for all adult faith formation and catechesis in the diocese. The sixth component is a methods class divided into two tracks for catechists in religious education programs and teachers in Catholic grade schools. 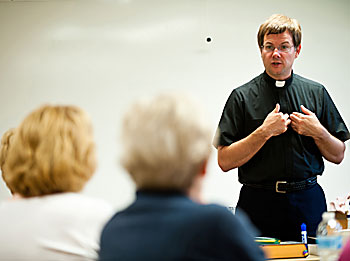 Fr. Brian Belongia leads a class on the sacraments and liturgy based on the U.S. Catholic Catechism for Adults. Fr. Belongia was one of nine instructors to lead classes on the adult catechism this summer at the diocesan campus. The classes were offered by the diocesan Department of Education. Similar classes will be presented at parishes around the diocese this fall.

As part of the newly revised certification program, the diocese trained 70 people as class instructors last May. Each instructor specializes in one of the USCCA certification components. Some are diocesan or parish employees and others are volunteers. Funding from the Bishop’s Appeal helped underwrite the instructor training.

This summer, the diocese also opened up the certification classes to all Catholics, marketing them as a course series on the adult catechism.

“When the USCCA first came out in 2006, it was (a goal of the U.S. bishops) to try to get it into every household,” said Sr. Jacqueline Spaniola, director of religious education for the Diocese of Green Bay. “And so this is one way … that we would be able to help people update and refresh themselves in the faith.”

Sr. Jacqueline, a Franciscan Sister of Christian Charity, was appointed by Bishop Ricken to oversee the certification program. She is also one of the program instructors. According to Sr. Jacqueline, opening up the classes to everyone also presents an opportunity for them to become catechists.

In late July and early August, summer classes were held on the diocesan campus. More than 140 people turned out for six daytime and evening classes held over three weeks. Similar classes will be offered at parishes across the diocese in the fall. 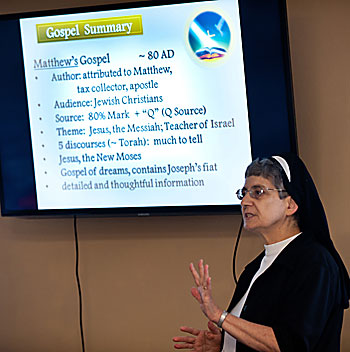 Sr. Jacqueline Spaniola, a Franciscan Sister of Christian Charity, leads a class on the Bible. (Sam Lucero | The Compass)

Among those attending the summer classes was Jim Goodwin of St. Joseph Parish in Sturgeon Bay. Goodwin said he learned about the class offerings in The Compass and, while he is not a teacher or catechist, he decided to attend to learn more about his faith.

“In the back of my mind, I might like to teach (religious education) but I don’t want to teach until I know what I’m talking about,” said Goodwin, a retired engineer. “I think (classes on the adult catechism) is a great idea.”

Julie Tushinski, a retired Catholic school teacher from St. Mary of the Angels Parish in Green Bay, said she took classes on the Bible and morality for her own edification. “The classes are rather small and there’s time for conversation and questions,” she said. “The instructors are just outstanding. It’s wonderful. I hope they offer it next year. The price is right – it’s free.”

Sue Werdeo and Beth Jarabek, both teachers at All Saints School in Antigo, decided to rent a hotel room in Green Bay while attending two week-long classes on the diocesan campus in early August. Both are working on their new certification. “I think the classes are excellent,” said Werdeo. “I appreciate having this chance to do it in the summer, where you can work on taking some of these classes now instead of the extra workload during the school year.”

Under the new certification guidelines, teachers and catechists have six years to complete the six components. However, few opportunities exist for adult faith formation in Antigo, Jarabek said. “So it’s great that it’s here during the summer. We’re not racing out right after school or getting back at 10 or 11 at night and still have to teach the next day.”

Jan Phillips, a catechist at St. Francis Xavier Cathedral, sees the classes as invaluable to religious education instructors. “We need to learn our faith before we can pass that on,” she said. “That’s vital or we are not passing on what our church is teaching.”

Because the material covered in class is based on the adult catechism, it is appropriate for all adult Catholics. “I recommend them to anyone,” Phillips added. 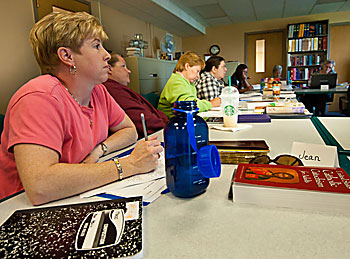 Catechists and adults interested in faith formation take part in Sr. Jacqueline Spaniola’s class on the Bible during an early August class on the diocesan campus. (Sam Lucero | The Compass)

When the new guidelines for religious certification were announced last March, Monica Janssen, catechetical coordinator at Ss. Peter and Paul Parish in Hortonville, said catechists at her parish “embraced this (opportunity) with enthusiasm.”

“They always looked at it as an opportunity to learn more about their faith,” she added.

Janssen was one of five religious educators from Ss. Peter and Paul to attend the prayer and spirituality class and the methods for catechists class. Others included fellow catechetical coordinator Tina Ellenbecker, Mary Jo Lantz, Cari Kramer and Ruth Ann Barthel.

She said her parish’s 13 other catechists will take similar classes that will be offered during the school year.

Sr. Jacqueline said the diocese will continue to offer classes on the adult catechism to Catholics throughout the year. She said it is especially appropriate as the universal Catholic Church begins to observe the Year of Faith beginning in October.

“We’re getting a lot of great feedback and people really are enjoying them,” she said. “We just want to get (the word) out there, that it’s not just for teachers. … The classes are offered to everybody.”

Those interested in registering for classes on the adult catechism can go to www.gbdioc.org/fcc or contact Carol Fountain by phone (920) 272-8309 or email [email protected] for class schedules and locations.