Fr. Marquardt was born and raised in Green Bay, where his family was active at St. Francis Xavier Cathedral. He first considered the priesthood in eighth grade, but had second thoughts when his mother died that summer. The example set by Msgr. George Schemmer, pastor at cathedral parish, convinced him to attend St. Lawrence Seminary in Mount Calvary for high school and junior college. He then studied philosophy and theology at St. Francis Seminary in Milwaukee. Fr. Marquardt was ordained to the priesthood by Bishop Stanislaus Bona at St. Francis Xavier Cathedral on May 19, 1951. 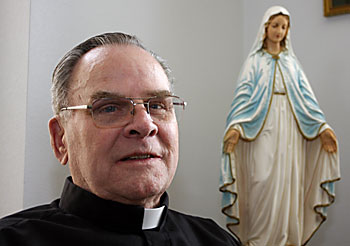 He served as an assistant pastor at St. Mary, Oshkosh; St. Joseph, Sturgeon Bay; Holy Cross, Kaukauna; and Ss. Peter and Paul, Green Bay. In 1964, he was appointed administrator at St. Hedwig Parish, West Kewaunee, and, in 1968, as pastor of Sacred Heart Parish, Aurora. Following a short leave of absence from October of 1970 to June 1971, Fr. Marquardt was appointed pastor of Holy Trinity Parish, Pine Grove. In 1975, he became pastor of Sacred Heart Parish, Two Rivers, where he served for 21 years until his retirement in 1996.

“On Easter Sunday of 1998, two weeks after we dedicated the new church, Fr. Don celebrated the 8 a.m. Mass with a standing-room-only crowd,” explained Fr. Harper. “Several weeks later, he told me that Mass was a highlight of his priesthood. It took awhile for me to understand his reaction, but eventually, I grasped that he only had to love here at St. Mary. There were no meetings, no responsibilities, just love the people and be loved by them.”

Fr. Harper also shared a story about Fr. Marquardt’s deep appreciation for the sacrament of anointing the sick. He was called to the hospital at midnight, and as he began to enter the room, the physician asked to speak to him in the hallway. “It is good that you are here, she won’t last the night,” said the doctor.

“Fr. Don shared with me about how that night lasted a year and a half,” said Fr. Harper. “He proclaimed the healing power of that encounter.”

In addition to being a parish priest, Fr. Marquardt also served as chaplain of Abbot Pennings Knights of Columbus Council 3955 of De Pere and once served on the board of directors of Roncalli High School, Manitowoc.

Fr. Marquardt will be remembered by many for his sense of humor. He was always ready with a corny joke or funny story to generate a reaction.

“Fr. Don told me that if ‘Amazing Grace’ was played at his funeral, he would come back and tell all his jokes again,” said Fr. Harper, leading to laughter by the congregation.

Bruce King, Fr. Marquardt’s nephew, spoke at the funeral Mass on behalf of the family. Christmas gatherings with the entire family were important to Fr. Marquardt as well as regular dinners with his sisters. King also provided insight into his uncle’s pastimes.

Fr. Marquardt loved music and had an extensive album collection. He was once an avid golfer and shot a hole-in-one, and his high game in bowling was a 287. He also enjoyed turkey hunting with his close friend, John Bressers.