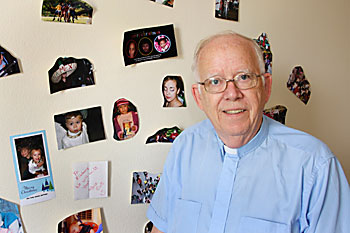 Norbertine Fr. Bill Ribbens serves as Hispanic Outreach volunteer at Catholic Charities in Green Bay. He celebrates Masses in Spanish at St. Thomas the Apostle Parish in Newton. (Rick Evans | For The Compass)

He’s also active in trying to get legal funding for those who cannot afford lawyers in civil cases. He said Wisconsin is one of two states that do not provide funding for such legal representation.

“Often it’s the elderly and single moms,” he said. “A lot more housing issues came up because of the mortgage crisis. I don’t know what the real number of people is that don’t even think about going to court because they don’t have any money. I’d like to know that number.”

When Fr. Ribbens entered the Norbertine community after graduation from St. Norbert College in 1957, he had a degree in biology and a minor in history. He taught earth sciences at Abbott Pennings High School in De Pere and Premontre High School in Green Bay for a total of 16 years. In 1980, he was named associate pastor at St. Joseph Parish in De Pere (now Our Lady of Lourdes) and served for a time as acting school administrator.

Work on the East Coast followed and he worked with the homeless. In 1985, he became certified in drug and alcohol abuse counseling through the Memorial Medical Treatment Center in Ashland, Wis. Today, he is a spiritual counselor for the Twelve Step program, working with the Norbertine Spirituality Center in De Pere.

Fr. Ribbens returned to his native Mayville (near Fond du Lac) to care for his mother in her last years. He also did part-time AODA counseling. Later, he came to work at the now-closed residential program at Our Lady of Charity in Green Bay, working with runaways, troubled teens and young mothers. And he met Sr. Guadalupe, who was in novice training there.

Through her, he met the little girl who led him to his work today, self-taught in Spanish and known to the local Hispanic community as “Padre Ribbens.”

He had been saying Mass occasionally at the OLC convent and Sr. Guadalupe told him about a little Hispanic girl with cystic fibrosis.

“One day, Sr. Guadalupe asked if I would like to go up to the hospital and visit her,” he said. “The girl was sedated all the time. But her mother was there. I didn’t know Spanish, she didn’t know English. But I thought I could stop up there and the mother would (at least) see somebody else besides the nurses.”

The girl soon died and Fr. Ribbens was invited to the funeral. He was surprised to learn that local Hispanics had no experience of funeral homes in their native countries and that families took care of all arrangements at home together.

“For me, to experience the parts of their culture that come together at that time of death was an important time,” the priest said.

So he decided to help where he could, accompanying Sr. Guadalupe on home visits and working on paperwork like bills and bank statements while she met with families.

Fr. Ribbens said he taught himself the Mass in Spanish, initially to serve the Hispanic community at St. Philip the Apostle Parish in Green Bay. Then he started celebrating Sunday Mass at St. Thomas once a month and, during the week, at St. Willebrord in Green Bay. St. Thomas soon became every week and, for a time, he also helped at Hispanic Masses in Door County.

“I thought that I would do whatever I could to help with the Hispanic people,” he said.

His work led him deeper into social justice issues and that is where his passion now lies. He serves on the board of Legal Action of Wisconsin, the Wisconsin Access to Justice Commission and the jail ministry board in Brown County.

In 2008, he was named a finalist for Catholic Charities USA’s 2008 National Volunteer of the Year Award and he has received the Community Quarterback Award from the Green Bay Packers.

But it’s not about recognition for Fr. Ribbens.

“It’s always strikes me that there’s a need,” he said. “If there’s something I can contribute, whatever that might turn out to be. The needs are huge and they don’t get a whole lot of attention.”

He said it’s ultimately about justice and Jesus.

“Jesus was all about justice. The people of his time didn’t know justice. And Jesus’ life was about compassion. And compassion is a lot different than pity. Compassion means you’re moved enough to do something. Pity doesn’t necessarily include that.”

So instead of thinking about retirement — or even a celebration for his 50 years of priesthood — Fr. Ribbens just can’t imagine doing anything else with his future than what he does today.

He shakes his head and looks at the family photos and children’s drawings that adorn his office, all from the Hispanic community he serves.

“We still have people sleeping under a bridge,” he said. “So more and more of that just becomes a part of my thinking and my looking at life. … Part of Jesus’ request to his disciples was that they do what they can to alleviate those issues.”