A reunion, of sorts, will take place as the Apostolic Vicariate of Bluefields in eastern Nicaragua celebrates its 100th anniversary in December. Three Sisters — Maria Drzewiecki, Agnes Fischer and Laura Zelten — who served in the vicariate a total of 67 years, plan to attend the celebration and return to the place they called home for many years, the town of Muelle de los Bueyes. 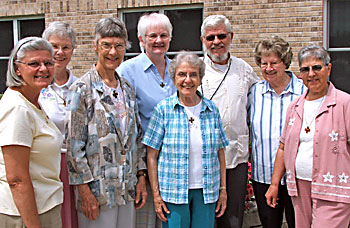 Their community’s connection to this Central American country began in the early 1960s when the Holy Father asked America’s religious communities to share 10 percent of their membership with the church in Latin America. Taking the challenge seriously, Sr. Mary Ellen Lowney, then superior general for the Sisters of St. Francis of the Holy Cross, contacted her friend, Capuchin Fr. Dan Kabat, who was serving in Nicaragua.

After learning more about the great need for faith formation and leadership formation, the sisters asked Fr. Kabat to convey to the local bishop, Matthew Neidheimer, their interest in serving in Nicaragua. It wasn’t until 1970 when the first sisters, Maria Drzewiecki and Mary Jo Monfils, arrived in Muelle de los Bueyes.

“When we started in 1968 to build Christian communities, we worked for the men because if you can capture the men they in turn would bring other men and they would become a small Christian community,” said Bishop Paul Schmitz of Bluefields, Nicaragua, who as a priest worked with the sisters in the mid-1970s in Muelle.

But there was a problem. “The men would bring their families to church but no one was working with the women,” he added.

The Capuchin bishop is a native of Fond du Lac and recently visited the sisters for the first time in Green Bay.

Fr. Kabat needed the sisters to do something groundbreaking. Instead of working in the traditional institutions such as schools or hospitals, the sisters worked in the parishes tending to the women’s pastoral needs, from preparing them and their families for the sacraments to learning how to be effective catechists, musicians and so on. “No place in all of Nicaragua had that,” said Bishop Schmitz.

The sisters also trained men and women peasant farmers to be teachers, a formidable task when adults routinely tested between the first- and fourth-grade level. “Every summer the sisters would teach (the locals) summer school and pretty soon would get them through grade school; then normal school, then get them a teaching certificate. And so as a result it was really the sisters who spearheaded that.”

While some courses were taught in town, sometimes the sisters and priests traveled by mule or horse to “the bush” (the remote, jungle areas) to reach people who could not come to town. These two- to four-week trips were primarily for people’s sacramental needs but no one could overlook the requests for academic help, basic medical attention, construction of outhouses and clean drinking water. And, as they did with the teachers, the sisters looked for someone locally who could be trained.

Even though it has been eight years since the last Bay Settlement Franciscan sister left Nicaragua, the work toward self-sufficiency goes on. Bishop Schmitz says the sisters were integral in connecting with local women and so much more.

Bauer is communications director for the Sisters of St. Francis of the Holy Cross.