GREEN BAY— Fans of the Green and Gold who check out the new Packers Heritage Trail will discover that a number of Catholic sites have strong ties to the team’s rich history.

The trail, designed as a self-guided walking tour, features 22 commemorative plaques located within a two-mile radius of downtown Green Bay. Seventeen plaques are part of a City Walk. Five others are a part of two spurs designed as self-guided bike rides.

St. Willebrord Church, known to many as the church where Vince Lombardi attended morning Mass, is among the city sites. Cliff Christl, a Green Bay native and longtime sportswriter who developed the idea for the tour, said that while St. Willebrord was an easy choice for the trail, he didn’t know if placing a plaque on church property would be possible. 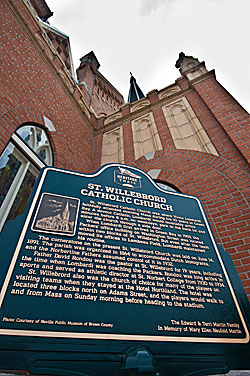 A commemorative plaque was recently erected outside of St. Willebrord Church in Green Bay. It is one of 22 plaques that are part of the new Packers Heritage Trail, a self-guided walking tour that recalls historic ties to the community and the Green Bay Packers. (Sam Lucero | The Compass)

Norbertine Fr. Andy Cribben, pastor at St. Willebrord, admits that he was initially skeptical of the possibility of what was first described as a nine-foot sign being installed outside the church. The post is placed three feet into the ground, so the plaque is actually at a six-foot level. The text on the St. Willebrord plaque convinced Fr. Cribben of the project’s merit.

“I thought the text was beautiful,” he said. “It connected faith and the history of the Packers.”

The text opens with Lombardi’s connection to the church. The history of the parish is also presented as well as information about Norbertine Fr. David Rondou, who was pastor at St. Willebrord during the Lombardi years.

“It’s interesting, why did (Lombardi) pick St. Willebrord? I think it had something to do with Mass times,” said Christl. “When he first moved to town there was the convenience of being close to his office on Washington Street, but why St. Willebrord instead of St. John’s or cathedral or one of the other nearby churches?”

Christl believes that once Lombardi walked in the doors at St. Willebrord, he likely built a relationship with Fr. Rondou. Sports were a common bond between the two men. Fr. Rondou served as athletic director at St. Norbert College in the early 1930s. Lombardi was a creature of habit, added Christl, so even when his office moved to Lambeau Field, he continued to attend Mass at St. Willebrord.

“I was told that Fr. Rondou never prayed for the Packers to win, but he did pray for the Bears to lose on occasion,” said Fr. Cribben.

The St. Willebrord trail plaque is nestled outside the church on the corner of Doty and Adams streets.

“It’s a nice location for people to pull up in their vehicles,” said Fr. Cribben. “I really like the embossed lettering on the plaque.

“People would come to the church and ask if this is where Vince Lombardi attended Mass,” he added. “We would tell them, ‘Yes it is, he sat near the back on the south side.’ There are those who say he sat in the fourth pew from the back. We have eight Masses on the weekend with our latest (English Mass) being at 5 p.m. on Sunday, so if there is a noon game, we pick up some of the post-game Packer fans.”

The text on the plaque also notes that visiting players attended Sunday morning Mass at St. Willebrord. They would walk from the Hotel Northland, which was only three blocks away.

“That’s another nice feature,” said Fr. Cribben. “It says something about their real lives, that they were men of faith.” 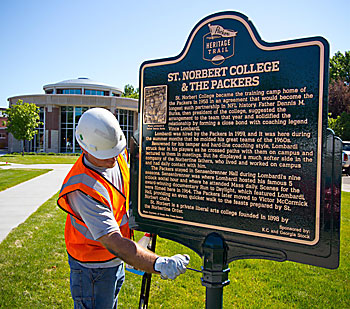 The Packers Heritage Tour sign was installed at St. Norbert College June 7 by Jones Sign. The sign is located in the grassy area near Michels Commons and Victor McCormick Hall (where the Packers stay for training camp) just off Third Street. (Submitted photo | For The Compass)

“We are proud of it,” he said. “Being around Cliff and Shirley (Christl’s wife) and their excitement made me excited about it.”

“We really appreciated the fact that the Norbertines and the parish allowed us to put up a plaque there,” said Christl. “That’s one thing that I can’t emphasize enough is the great community support that we’ve gotten all along.”

A plaque was also installed on the campus of St. Norbert College, De Pere, as part of the Lambeau-Lombardi Spur of the Heritage Trail. The Packers have held training camp at the college since 1958. The trail focuses on the first 50 years of the Packers, 1919 to 1968, so the text on the St. Norbert plaque, located on Third Street, north of Schuldes Sports Center, addresses the Lombardi years.

“One of the most fascinating aspects is that Lombardi could be so intimidating when he was around his players,” said Christl, who wrote the book, “A Championship Team: the Packers and St. Norbert College in the Lombardi Years,” in 2010. “He would bark at them to the point that they would be scared to death walking around campus, and at the same time, he was so humble when he encountered priests and nuns on campus, particularly nuns. I guess he was extremely soft-spoken and always courteous and always made a point to stop and talk with them.”

Christl added that the Lombardi teams spent more time on campus, where scenes for the documentary “Run to Daylight” were shot.

“They had their meetings there,” he said. “They ate all of their meals there. It was a much different experience for the Lombardi Packers. When you talk about the ways those teams were molded, it was on the practice field, but it was also on the campus, much more so than today.”

Christl also points to a site on the City Walk for its close ties with the Norbertines. The Columbus Community Center/WBAY Building was taken over by the Norbertines in 1940. The building housed Central Catholic High School.

“The Packers used the top floor as a clubhouse,” explained Christl. “They had a big stockholder’s rally there in 1950, the stockholder’s drive that saved the franchise. The Norbertines had a presence there through most of that period of time in Packer history.”

Christl added that he would like to install a plaque at Bay Shore Park in New Franken to commemorate Rockwood Lodge, which had Norbertine roots and was the Packers training quarters from 1946 to 1949.

Curly Lambeau’s gravesite in Allouez Catholic Cemetery is featured as part of the Lambeau-Lombardi Spur for those who want to pay their respects to the founder and first coach of the Packers. There is no Heritage Trail plaque in the cemetery, but information and a photo are featured on the trail website at www.packersheritagetrail.com.

The website also showcases photos and information about sites that Packer fans may find of interest in addition to the tour stops. St. Francis Xavier Cathedral is among that group. Curly Lambeau’s first wedding was held at the cathedral. A requiem Mass was celebrated for Lambeau at St. Francis Xavier three days after his funeral in 1965. His grandfather’s masonry company helped build the church.

The Heritage Trail project originated from stories Christl wrote for both the Milwaukee Journal Sentinel and the Packers Yearbook. The story he wrote in 2009 for the yearbook focused on a downtown walk linked to team history.

“That’s when it clicked in,” he said. “Hey, my wife and I have lived downtown for four years, and this could be a good community project. We could do something for the downtown area and try to draw more tourists and even locals to downtown.”

The project began in earnest two years ago. Cliff and Shirley founded the Packers Heritage Trail Foundation, Inc. as a non-profit and a board of directors was formed.

The plaques are made to last for generations and none of the text should become outdated. Christl emphasized that fans can customize the tour to their choosing.

“If they feel more comfortable driving to the sites, a lot of the plaques are readable from their car while parked along a city street,” he said. “You can do whatever you want. I’ve seen people already doing it in various ways. I appreciate people’s interest. There’s a lot of history in those plaques.”