“They still said the Mass in Polish back then,” said Banaszynski. “I remember going to church, especially at Lent and Advent, with my grandmother who was a Polish speaker. They would say the Mass at Lent in Polish, which took three times longer. At Christmas Eve there was always a beautiful choir. It was something quite magical.” 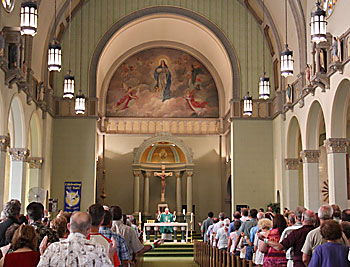 Franciscan Fr. Finian Zaucha, pastor of Assumption of the Blessed Virgin Mary Parish in Pulaski, leads the “Our Father” during a July 22 polka Mass. The parish is celebrating its 125th anniversary in 2012. (Steve Wideman | For The Compass)

As Assumption BVM marks its 125th anniversary as a parish in 2012, the magic of Mass remains, most notably to visitors in the church’s twin, 135-foot-tall Spanish-style towers, the deep tolling of its trio of bells weighing 2,000, 800 and 200 pounds and the 50-foot ceilings showcasing more than 40 Italian-made stained glass windows.

A centerpiece of Polish heritage

More important, parish members say, is the magic and sense of community drawing hundreds to participate in various ministries and making the church a centerpiece of Pulaski’s Polish and Catholic history and heritage.

“When I was growing up the church was always a cornerstone for the village. All activities were centered on the church or school,” said Banaszynski, who moved from her Pulaski roots to an award winning, international career in journalism, winning a Pulitzer Prize in 1988 in feature writing as a reporter for the St. Paul (Minnesota) Pioneer Press.

Banaszynski, now a journalism professor at the Missouri School of Journalism, periodically returns to Pulaski to visit her cousin, Susan Banaszynski, who lives across the street from Assumption BVM.

“Whenever I go home I go to the church. It’s quite gorgeous,” she said.

The roots of Assumption BVM began in 1877 when a non-Catholic landowner, John J. Hof, donated 120 acres of land in Pulaski to Polish-born Franciscan Br. Augustine Zeytz on the condition a church, Franciscan monastery and novitiate be built in the village.

By 1885 a group of 35 Polish immigrant families from Pulaski traveled once a month to a Polish center in Hofa Park, eight miles away, to join other Polish settlers in Sunday Masses presided over by priests from Seymour or Menasha.

That same year the Pulaski immigrants decided to come together and donate 50,000 board feet of lumber along with a pledge of sweat and muscle to build a church in Pulaski, said Elaine Grygiel, chairperson of the parish’s 125th anniversary celebration.

“But a forest fire in 1886 swept from Maple Grove through Pulaski to Oconto destroying all the lumber,” Grygiel said.

Grygiel said Hof persuaded the discouraged Pulaski settlers to stay and donated his office to use as a temporary chapel.

Green Bay Bishop Frederick Katzer gave permission for the first Mass to be held in Pulaski in the fall of 1886.

“The Assumption of the Blessed Virgin Mary Parish was canonically established on April 27, 1887,” Grygiel said.

In commemoration of that event, Grygiel said the parish scheduled five months of celebrations beginning in April and concluding on Aug. 18 with a Mass to be celebrated by Bishop David Ricken.

“Every month we’ve had something. In June we had a stained glass window tour. In July it was holy hour with Bishop (Robert) Banks. We’re making a video and getting people together to recount the past and what it took to get us together as a parish. It’s still a strong community that gathers here,” Grygiel said.

A wooden church was constructed by parish members in 1888.

In 1899 the Sisters of St. Joseph of the 3rd Order of St. Francis from Stevens Point established a school and convent.

By 1901 a new school was completed and planning began for a larger church.

The foundation of the new church was laid by 1907, but parish members, wary of taking on debt, decided against building the remainder of the church. Services were conducted in the roofed-over basement. The Franciscans donated wood for the roof, Grygiel said.

The foundation of the present-day church, built on land donated by the Franciscans, was laid in 1924, but again parish members, short on cash, were reluctant to take on the necessary debt to finish the church and, instead, held services in the basement.

The 198-foot-long brick church, now dominating farmland surrounding Pulaski, was finally completed in 1931 at a total cost of $225,000.

Parish members volunteered to do much of the construction, according to local historical accounts. Construction began on a new school in 1955.

When work was finished on the current church it was the biggest rural Catholic church in America, according to the Guinness Book of World Records, Grygiel said.

The church building was the talk of the entire state, said Franciscan Fr. Finian Zaucha, pastor at Assumption BVM.

“You can see in the church the faith these families had at the time it was built,” Fr. Finian said. “The edifice was and is a reflection of their deep faith.”

While Polish immigrants built the church and parish, Pulaski’s Polish ancestry has been diluted somewhat through marriage and population shifts and through the passage of time, Fr. Finian said.

“The Polish population is down percentage-wise,” Fr. Finian said.

The number of Polish names on the parish roster, though significant, has changed considerably, said Grygiel.

“We don’t have the Polish names we used to have when I was a child,” Grygiel said.

Occasionally, during the celebration of first Communion, Fr. Finian, who is of Polish descent and speaks Polish, encounters a Polish name and calls the new communicant by their name with the correct pronunciation.

“They’ll tell me ‘That’s not how you say my name.’ They never heard it pronounced that way,” Fr. Finian said. “But then this younger generation is already the fifth generation distant from their ancestors who came here. I don’t know if they know they are Polish or can even find Poland on a map, but they are Polish.”

Fr. Finian, who is completing his first year as pastor at Assumption BVM, after a 41-year career teaching religious education in Wisconsin and other states, has a goal for the remaining five years of his term as pastor.

“I want to educate kids about their Polish heritage. Is this a Polish community? If you look at the parish roster, yes. But no one knows Polish. No one speaks Polish. We can’t have any Polish service here because no one knows Polish,” Fr. Finian said.

Occasionally, the Polish heritage of Pulaski comes to the forefront through marriage.

Marian Schroeder, 89, is a convert to Catholicism and has been a member of Assumption BVM for more than 60 years.

Two of her three daughters, Claudia Ryczkowski and Brenda Bryfezynski, both of Green Bay, took Polish names when they were married in the church.

“I’m excited that it’s the 125th anniversary. There are so many opportunities where the church cooperates with the community,” said Schroeder, who spent a part of Polka Days answering visitors’ questions about artifacts of Assumption BVM, including the original baptismal font of the 1931 church, on display at the community museum.

“The church has always been a source of grace, the peoples’ connection with God,” Fr. Finian said.