Runner credits God for her skills

Chaudoir is relatively new to running, having taken up the sport just seven years ago, but she has certainly made a name for herself amongst the area’s elite runners. “I didn’t do any sports in high school. I didn’t have the confidence,” said Chaudoir. “I didn’t even know what a half-marathon or a marathon was. I started running when I turned 30.” She said she walked in the morning to pray “and clear my head.” 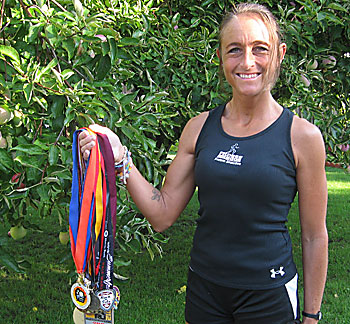 “I got to the point that I had a lot of emotions so I started running to release them,” added Chaudoir.

One day she took her car and followed the path she was running and realized she had run two miles. “I just got caught up in how that made me feel and I started running more and more. Someone saw me running one day and asked if I did marathons and I said no. They told me I should do that someday.”

In 2006, she entered her first Cellcom half-marathon. “I trained for that by pushing my daughter in the stroller for an hour; I would run eight miles,” she said. “I didn’t even know how I would do; I just wanted to finish it. I ended up placing third in my age group.”
That was just the boost of confidence Chaudoir, a personal trainer and the mother of five children, ages 3, 9, 12, 13 and 15, needed. “I realized that I was actually good at something. It really made me become passionate for running.”

With no knowledge about running or training, she went online to learn more.

“I found out there were shorter runs like 5Ks, so I started signing up for a few of them,” Chaudoir explained. “I started winning and felt good about it. Those achievements and accomplishments made me feel so much stronger in every other part of my life — emotionally, mentally and physically.”

When she races, Chaudoir carries a special piece of jewelry with her, a rosary bracelet. “It’s got the cross and I hold the cross in my hand and at the start I stand there and say, ‘God, do whatever you want to do because I can’t do this (by myself).'”

Last year, Chaudoir ran 41 races. This year she has already has run 35 races and has at least 10 more coming up. Many of the races are fund-raisers for charitable organizations. In 25 of the races this year she either placed first overall for women or first in her age group. In three of the races she placed first overall for both women and men. Her personal best times are 17:58 for 5K, 37:19 for 10K, 1:23:45 for a half-marathon and 2:57 for a full marathon.

What really makes Chaudoir’s feats remarkable is the fact that she suffers from an autoimmune disease that leaves her in constant pain. She has turned to God in her time of distress.

“Twice this year I ran 26 miles to the Shrine of Our Lady of Good Help in Champion,” said Chaudoir. “The first time I did it was this winter when I was really sick. I wasn’t able to run much at all and I had a fracture in my leg.”

She said she sought healing, both physical and emotional. “That was part of my goal, but the other part was to be able to help other people.” She collected donations for Golden House, a domestic abuse program and shelter in Green Bay. “I stopped people and asked them if they’d like to donate money.”

After arriving at the shrine, she stopped by a crucifix behind the shrine chapel and prayed.

“There is a statue of Jesus hanging on the cross. I ran back there and prayed and cried and I felt healing inside,” she said. “When I left there my fracture stopped hurting. It just went away.”

One day Chaudoir met a man at a race and he told her there was a reason she ran fast. “Do you think God would give you the ability to run like that without a reason?” she recalled him saying. His words brought her to the realization that her talent wasn’t to bring fame or glory to herself.

“I have to use it now for how God wants it to be used,” she said.

While Chaudoir has found her passion in running, she knows that it’s not for everybody but it is important to discover one’s own God-given talents.

“Find the thing that God has gifted you with and put all your energies into that gift and show him how much you appreciate it, rather than looking at everything that’s hard in your life,” she said. “When you focus on the gift, that’s when things start turning around because he’s given you that gift for a reason.”