To assist with the challenge of reinforcing the Norbertine identity on campus, the college has offered the Norbertine Heritage Tour for the past seven summers. Groups of St. Norbert personnel, donors, trustees and friends of the college travel to Europe to visit Norbertine abbeys and institutions. Two tours were offered this summer. Kunkel was part of a 22-person group that traveled throughout Belgium and France, June 25 to July 7. 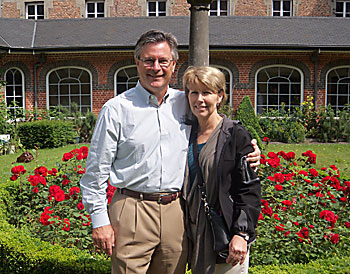 St. Norbert College president Thomas Kunkel and his wife, Deb, toured Leffe Abbey in southern Belgium as part of the most recent Norbertine Heritage Tour. Leffe Abbey, founded in 1152, is known internationally for its ales, which were once brewed on the premises. The Heritage Tour for allows college administrators, faculty and staff to connect with the Norbertine identity and uphold the order’s traditions and values on campus. (Submitted Photo | For The Compass)

“It is very interesting, very informative and very inspirational,” said Kunkel, who took part in his first tour in 2009. “It puts flesh on the idea, ‘What does it mean to be Norbertine?’ You also find yourself appreciating things that have lasted 900 years. They last because they are built in bedrock. … They’ve survived the Reformation, wars, Napoleon, Communism. Not every abbey survived, but the order survived and prospered through. It’s testimony to the strength of the core values and belief systems.”

The tour included visits to five abbeys, including Grimbergen in Belgium, which was founded in 1128 and is the oldest working abbey in the world. A trip to Prémontré in northeast France, the origin of the order, was another highlight.

“A remnant of a chapel remains and some of the walls are still up,” said Kunkel. “To be standing where (St.) Norbert said Mass is very moving.”

Representatives from Archmere Academy joined the St. Norbert travelers on the tour. Archmere is a Norbertine high school in Wilmington, Del., outside Philadelphia. A future summer leadership camp at the college for Archmere students was discussed, said Kunkel.

St. Norbert tourists take part in a Cornerstone Seminar prior to the trips. Dr. William Hyland, director of the Center for Norbertine Studies at the college, said that the course helps prepare the group for what they will see lived out.

“Then when you come back, you think about everything you’ve learned and experienced,” he said. “You see how that helps you shape your job and your vocation working at the college. Ideally, it’s a process that keeps going.”

Hyland has taken part in four Heritage Tours, including the most recent. He said the last trip took on greater significance because it was prior to St. Norbert Abbey hosting the 2012 General Chapter, July 22 to Aug. 4, at the college. Part of his goal on tour is to build awareness for the Center for Norbertine Studies, a repository for Norbertine books, artifacts and culture. A number of abbeys have committed to making contributions to the center, which is located in the Mulva Library. The creation of a digital database of documents pertaining to the order is in the plans. Hyland also hopes to have Norbertines from overseas serve as guest professors at the college.

Hyland added that the trips are always good learning opportunities, even repeat visits.

“There is only so much you can learn about an order from books,” he said. “It’s a family history and every abbey tells its own family story. A lot of it is oral and a lot of stories come up when you are just walking around.

“You see something different every single time and meet different people,” he added. “On one hand, each place is very different, but there are commonalities. The same Norbertine charism of cummunio and ministry growing out of communal life is found at every Norbertine abbey.”

The most recent group spent the Fourth of July in Normandy and also had the opportunity to tour Paris, but the bulk of the tour focused on Nobertine sites. The trips pay dividends at the college, said Kunkel.

“They come back to their job with the idea of helping put what they’ve learned and experienced into practice every day,” he said. “We’ve had some faculty who aren’t even Catholic on the trip. They come back with a sense of zeal about the Norbertine values and traditions and incorporate them into new classes.”

Kunkel took home a special keepsake from the recent tour. The walls of the chapel at Prémontré are so old that they are flaking.

“They don’t want you banging into the walls, but at the bottom there are small stones,” explained Kunkel. “I took a couple. I have them at home almost like relics. It’s emotional when you think about the history of where we were standing.”