“I didn’t think I could do it, but I did it. I totally had to rely on my faith in God to get up there. You can’t see something like that and not see God,” said Schroeder, one of 48 young Catholics from the Green Bay, Fox Valley and Boscobel areas participating in the 2012 Colorado Leadership Retreat near Estes Park, Colo. 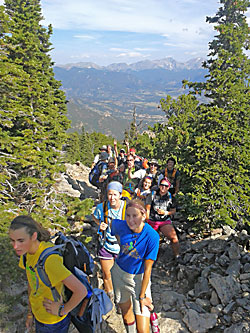 Participants in the 2012 Colorado Leadership Retreat pause for a photo during a hike in the Rocky Mountains last month. The group of 48 Catholic young adults, mostly from northeast Wisconsin, took part in the event, which began in the 1980s. (Submitted Photo | For The Compass)

Goal is to encounter Christ

“Our main goal is for kids to encounter Christ,” said Jim VandeHey of Kaukauna, an adult leader and coordinator who made his seventh trip to Colorado from July 10 to 19.

“The trips were started in the mid-1980s by Sherri Daul of Nativity Parish in Green Bay. Sherri was one of the first paid youth ministers in the diocese. She had a dream of taking kids to Colorado to experience Jesus Christ,” said VandeHey, who is a 2011 graduate of the diocese’s Emmaus Lay Ministry Leadership Formation Program.

When Daul passed away from cancer, VandeHey’s parents, Jan and Ken VandeHey, took over the program from 1996 to 2006.

“I took the program over in 2006,” said Jim, who operates Kinsman Outdoor Adventures, which organizes outdoor and bow hunting retreats for fathers and sons.

VandeHey said the youths on this year’s leadership training trip, ranging in age from high school freshmen to college sophomores, came primarily from Kaukauna, Little Chute, Freedom, Wrightstown, Neenah and Boscobel, a community in southwest Wisconsin within the Diocese of Madison.

“We try to make their faith relevant to them,” VandeHey said. “The basis of the trips 20 years ago was to develop Catholic leaders, youth who are going to step up and lead in their Catholic faith and evangelize,” VandeHey said.

The purpose remains today. Retreat participants begin by learning about self-esteem and self-worth.

Other days are devoted to discussing the power of the Holy Spirit, teaching youths “we are the body of Christ,” having youth leaders who have been to previous retreats give witness talks about their relationship with Christ, he said.

“Once the kids encounter Christ they, in turn, begin to understand the Eucharist. A lot of kids don’t have a good understanding of the presence of Christ in the Eucharist.”

VandeHey said the youths are challenged by one of three mountain climbs ranging in elevation from roughly 12,000 feet to more than 14,000 feet.

“When you get in the mountains of Colorado you really see the power, awe and wonder of God, which is one of the gifts of the Holy Spirit,” VandeHey said.

He said some of the retreat participants obviously sign up just to enjoy river rafting and hiking.

Jane Vanden Boogart, who coordinated the trip along with VandeHey, agrees.

“Some people feel they are just going to put up with the religious part of it. Some kids pushed religion away, but then said they got it. You can see the lights go on. It’s a good journey,” she said.

The retreat also features adventures, including white-water raft rides down the Poudre River, community building with other retreat participants and special solo days.

Solo days allow youths four or five hours alone in the mountains to get a chance to write letters and simply think about the presence of God.

“They have time to reflect on their relationship with Christ,” VandeHey said.

Schroeder, who readily admits to not being athletic, said the climb up Hallet Peak was the highlight of her six-day immersion into building a relationship with God and Jesus Christ.

“I experienced a ‘God high,'” Schroeder said of her successful climb. “You become so into your faith and you are with other people who are also really into their faith. Before this trip I was always down on myself. Then I realized that God loves me no matter what.”

“A lot of kids think that maybe they can’t do something, but they come to realize during the retreat, with help from the community of fellow retreat participants and relying on prayer, they can do it. ‘I can do all things through Christ who strengthens me.’ That is one of our themes,” VandeHey said.

Schroeder’s “God high” reached its zenith during her solo day, which she spent sitting under a tree in a rock-filled area at the retreat’s base camp.

“It hit me like a ton of rocks to know I was loved,” Schroeder said.

Vanessa VandeHey, 16, of Kaukauna, made her second trip to Colorado, this time as a youth leader.

“A lot of retreat participants make the comment, ‘How can you look at this (Rocky Mountains) and not believe in God and creation?’ It’s something only God could create,” Vanessa VandeHey said. “Overall, my favorite part of the trip was just watching people get to know Christ and see him for the first time. It was really cool. There was one person who wasn’t even Catholic. To see him encounter Christ was amazing.”

Return home can be challenging

The most challenging part of the retreat is returning home and missing the intense feeling of Catholic community generated by the retreat, she said.

Ben Vanden Boogaard, 20, of Little Chute, agreed with Vanessa that the hard part of the retreat is coming home.

“You get on such a ‘God high’ and are so much into your faith, but when you come home you are not surrounded by the same people and encouraging forces. It’s hard to keep that high going and easy to fall off your faith,” said Vanden Boogaard, a UW-La Crosse student making his second trip to Colorado.

Jim VandeHey said youths are increasingly encouraged to keep in touch through get-togethers and through the use of social media.

“We are strong together and weak as one,” VandeHey said.

Jim VandeHey said the retreat is a good time for participants to look at vocations in the church. “We’ve had two go to seminary and one girl is now in a religious order in New York,” he said. “The more you can focus on your relationship with Christ, the easier it is to discern your vocation,” VandeHey said.

Taylor Schroeder said that during the retreat she opened her life to God “like I had never opened myself up before.”

“I feel called to the married life, but I am also definitely more open to what God has planned for me,” Schroeder said.