In 1999, Fr. Shea opened Sarnelli House in the village of Don Vai to serve children who tested positive for HIV or AIDS. The epidemic saw many infected adults having children who were born with the virus. The parents were often too sick to care for the children, which led to neglect, abuse and abandonment. 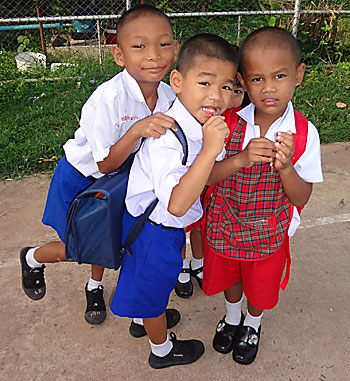 Three orphaned boys from House of Hope begin their first day of school earlier this year. Redemptorist Fr. Michael Shea, a Wisconsin priest, opened Sarnelli House in Thailand to assist abandoned children, including those with HIV/AIDS. (Submitted photo | For The Compass)

“The government didn’t acknowledge the spread of HIV and AIDS because it didn’t want to scare away the tourists,” said Fr. Shea. “They didn’t start educating people right away.”

Sarnelli House, while being the name of a home that cares for children with HIV/AIDS, is also the umbrella name for other facilities under the care of Fr. Shea. These include Nazareth House for teenage girls with HIV/AIDS; St. Patrick Boys Home for abandoned and orphaned teens; Jan and Oscar House for teenage boys; House of Hope for babies and toddlers; and Our Lady Refuge Home for abandoned and orphaned girls.

“The amount of children we receive with HIV or AIDS has noticeably diminished over the last two years,” said Fr. Shea. “We don’t get as many as in the past. We still get a steady number of kids because we take care of the kids who were abandoned or abused. When they’ve been beaten or mistreated, they don’t trust anyone, so we try to build that trust.”

Redemptorist Fr. Joe Ole accompanied Fr. Shea on his visit to the diocese. Fr. Ole, a native of Chonburi, Thailand, did his first mission appeal in English at Mass on July 29 at St. Francis Xavier Church. He is serving at Sarnelli House prior to pursuing advanced studies. When Fr. Shea was novice master, Fr. Ole was one of his students.

Fr. Ole shared the story of family he visited where the father, mother and 1-year-old boy all had HIV/AIDS. The father died and the mother was fearful about the future of her son. She fretted about watching her child die before her eyes and also struggled with the possibility that she would die first.

“Her words really touched me,” said Fr. Ole. “She said, ‘If I die no one will take care of my child.’ The tears were rolling down her face.”

He also shared the journey of a 14-year-old girl who recently arrived at Sarnelli House. She had been sexually abused by her father for two years. Her mother didn’t believe her. She was placed in an orphanage run by the government after telling a teacher.

“She was bullied by the older girls at the orphanage,” explained Fr. Ole. “Her father is still trying to find her.” 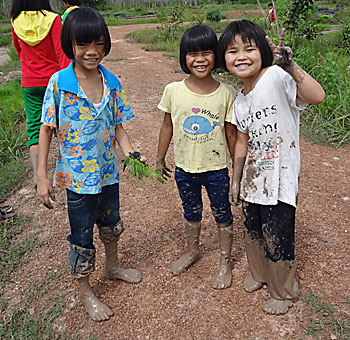 “If he finds her, he will kill her,” said Fr. Shea. “The biggest thing is to keep them safe.”

Sarnelli House, which features a 52-person staff, provides the children with health services, education and structure in the hope that they will become responsible adults in the future.

“I’ve learned over the years,” said Fr. Shea. “We didn’t discipline the kids with AIDS early on because we thought they were going to die. We now know that it’s possible for them to live with treatment and medicine. They are typical teenagers. Some of the boys get caught smoking, so we have to discipline them. The girls are usually difficult at 15 or 16 and then at 17, they tend to refocus.”

Education reform is a priority, added Fr. Shea. The young people are doing well in school, but they are not connecting their education with a career.

“I didn’t know how to challenge them,” said Fr. Shea. “They were doing fine and completing school, but the only jobs they were qualified for was being a cashier at 7-Eleven.”

“We are talking to the kids and finding out what they like to do,” said Fr. Ole. “We would like to get more of them into vocational schools with a (particular) job as their goal.”

Sarnelli House does not receive any government funding. Steps have been taken over the years to make the facilities as self-sufficient as possible. Fish ponds supply food year round. The properties also include chicken coops, livestock, a rice mill and vegetable gardens.

Fr. Shea grew up on a farm, but said that farming in Thailand is much different. His farm background created a bond with the late Fr. Tony Dolski who served as pastor at St. Francis Xavier Parish.

“I had a great relationship with Fr. Tony,” said Fr. Shea. “I really admired him. I got off the farm. Tony farmed for awhile before his vocation. He was a good friend. I appreciate Fr. (Richard) Getchel’s hospitality and the people here have been very good to us.”

To support Sarnelli House or for more information, go to www.sarnelliorphanage.org.